Works, which were due to be completed by August, will now continue into next year and will be suspended for three weeks over Christmas to allow better traffic movement 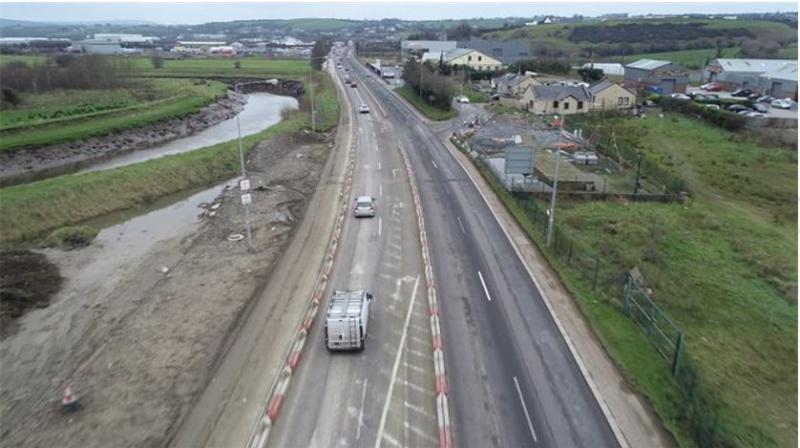 Major roadworks on a main artery into Letterkenny will not be completed until next year.

The upgrade to a 1.4km stretch of the N14 road between the Dry Arch roundabout to the Polestar roundabout was initially expected to be finished by August.

However, the works will now stretch into 2023 and will be suspended over Christmas in an attempt to avoid traffic congestion.

Councillors in the Letterkenny-Milford Municipal District were told that the project has been ‘severely affected by the global supply and inflation issues arising out of international events.’

The contractor sought to mitigate these issues with an alternative design, however but efforts ‘have not produced a workable or feasible solution’, a response to queries from Donegal County Councillors Donal Kelly and Gerry McMonagle said.

“The contractor has significantly progressed the works with the road and footway elements up to 80 per cent complete,” the Council’s reply said.

“To date, the works have been carried out with significant work restriction to ensure the minimum disruption to traffic flow on one of Donegal’s busiest roads while also ensuring the safety of both workers and the general public.”

After being hit by an initial delay due to the Covid-19 pandemic, work began in June, 2021.

The issues now facing the contractor has predominately affected the retaining, flood defence and boardwalk structure adjacent the River Swilly.

Although the road works will be ‘substantively completed’ the structure and associated elements will not be completed until 2023. It is estimated that it will be the first quarter of next year before the work is finished.

“While this is disappointing, it was inevitable given the significant and unprecedented external factors at play,” the Council said.

“All parties are working together to minimise and avoid impacts on the public wherever possible. Works will have an early shut down from the period of 16th December to first week in January to allow free movement of Christmas traffic.”

The project includes a new cycleway and footpaths as well as pedestrian/cycle crossing points.