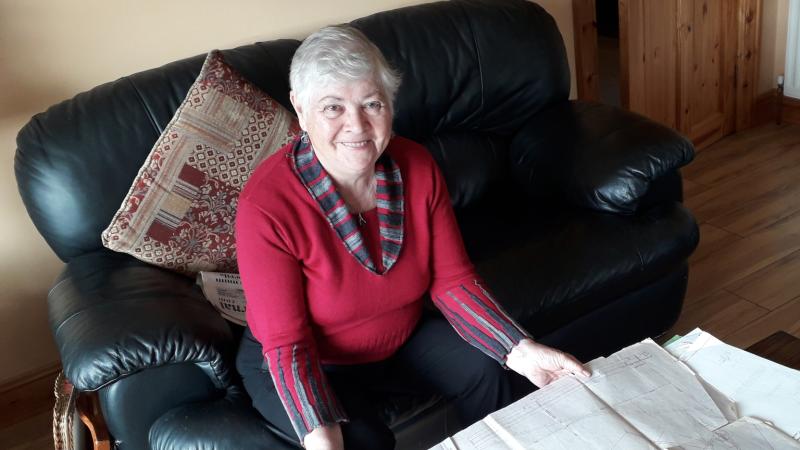 The day Mervin Lecky from Donegal County Council knocked on Sheila Grant's door proved to be a momentous one for her and her neighbours in Altaghderry in Killea.

Of the 14 or 15 in the area, Sheila's was the last house he visited that day. The rest, as they say, is history.

Mervin explained to Sheila he had been sent from the Council to speak to people were not connected to the mains water supply. At the time, 1979 / 1980, there was a group water scheme through Killea to Newtowncunningham but there was nothing in the Altaghderry area right up to the Donegal – Derry border.

Sheila recalled: “Mervin said he had been around the rest of the houses and everybody wanted the mains water. At this time we were all having to get our water from wells. It used to take us all day Sunday to fill the twin tub washing machine. I said, 'That's great. I would love the water'.

“Well, Mervin came back about two hours later and said he had been around every house again and everybody wanted the water but no-one wanted to promote it. He needed a Promoter, somebody to be responsible for the Scheme, somebody to do all of the work. At the time I was working and had two children at school. I told him I couldn't do it.

“He said I was his last hope and if I didn't do it, it might be 10 years before the Council sent somebody out again. So foolishly I agreed to do it, to be the Promoter of the Altaghderry Group Water Supply Scheme, which even meant getting the specified colour of paint for the pump house door.

“The Council said I had to ask every household for IR£400 to start the Scheme. Then the paperwork began coming and I had to sign this and sign that. I had to get engineers and contractors and everything else all sorted out. I did all that, then the Council engineer met them on site here.”

The contractor involved in the Altaghderry Group Water Supply Scheme was Sean McDaid from Castlethird in Carrigans. The water came from the Killea Reservoir which spans counties Donegal and Derry.

Sheila also had to get permission from the landowner where the pump house was going to be situated.

She said: “That landowner was Jack Lamberton from Fahan, who also became the signatory on the electricity account. The signatories on the bank account were John Black, George Cole and myself. Sean Toland from Kildrum also one of the people who got the water through the Scheme.

“We had a few hiccups here and there along the way but the Scheme, finally, got up and running in 1985.

“I got a letter from Donegal County Council to say that the Council would hold on to it for a year and anyone who wanted a connection in the meantime would have to get a letter signed by me. The Council took over the Scheme in 1986.

“We were lucky here in Altaghderry. My uncle, Willie White, Jim Colhoun and Dr White had been involved in the group scheme in Killea up to Newtowncunningham, five or six years earlier and they had had to go back to each householder asking for IR£50 more. Whenever the Altaghderry Group Water Supply Scheme was completed, I was able to give everyone back 1R£131 and I got just the same as everybody else.

“The Council had allowed us IR£1,000 in case we hit rock during the digging. I remember praying that day they wouldn't hit rock, and they didn't. I was very relieved.

“There was one farmer who came to me and said he would take the water but he was not going to contribute IR£400, as it was only for cattle. He said he would give IR£250.

“I told him, 'In years to come, I am not going to have it said I took IR£250 of somebody when everybody else is giving IR£400'. I told him I had an aunt who lived over the road on her own and she would use less water in a year than one of his cattle.

“All of the householders would have got the water for nothing if that farmer had taken it.

“We were allowed a grant of so much for every household which joined the Scheme. But, he would not take it. There was another farmer who had a house on his land and would have been entitled to a bigger grant, but he wouldn't take it either. We said to him even to the very last day. He passed by and my husband said, 'Will you take it now across the road to your house?' and he said, 'No, I'll get it myself.

“About three months after the work was finished, his wife came to our door and said, 'I have these forms out from the Council. We want to get the water. I signed the forms and she came back again in a fury and said, 'Do you know how much they [the Council] wants? IR£3,500, to put in the water'.

“The Council would not let them take the pipe through the field. They had to go along the road, which had to be dug up. I said I was sorry but that I had tried my best before we were finished.

Sheila smiled as she remembered going around all of her neighbours' houses on December 8, 1985.

She said: “It was a Sunday. I gave everyone back the money that was left over when the Scheme was completed.

“I took the same as everybody else. I did not want to make anything. I just wanted the water. It was a great wee Christmas present for people getting that money back. I was pleased I was able to do that.

“Getting the Altaghderry Group Water Supply Scheme up and running was a lot of work but I just kept moving forward, doing whatever had to be done.

“I dealt with a man in Donegal County Council called Patrick Thomas who was great to deal with about the paperwork. I was more times up in the Council sorting things out. I'll never forget, it was a man called John Masterson who drew up our plans.”