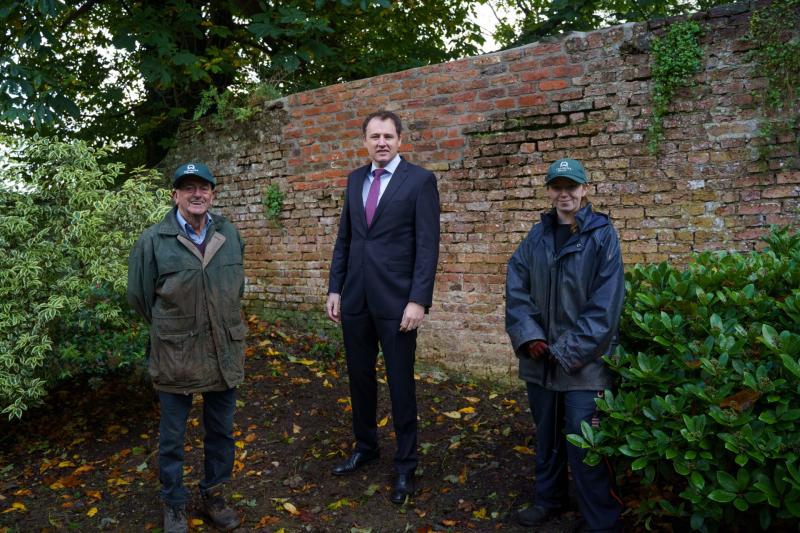 Dunmore House, outside Carrigans, is widely known for its beautiful gardens.

Awarded by the Heritage Council, GLAS is an annual grants scheme for farmers to ensure the conservation and repair of traditional farm buildings and related structures.

The boundary of the GLAS tillage farm at Dunmore is delineated on two sides by the wall of the walled garden.

Speaking to Donegal Live, Amelia McFarland, who runs the gardens at Dunmore House said they were delighted to have received the GLAS grant.

Amelia said: “It enabled us to restore the old farm buildings and the wall of the walled-garden. We have now completed the work and Charlie McConalogue, the Minister for Agriculture visited us, which was very exciting, to see the results.

“We had to replicate the old wall, which had collapsed in two places.

“The wall was built at a time when there was not any cement, so we were using old lime mortar and dry stone wall building to replicate what was already there.

“We are so grateful to the Department for their support in helping us to restore it.

“The gardens are open to the public so all our visitors will be able to appreciate their restoration. The walls are very interesting in that the sides that face south and east are lined with red brick. This gives a warmer micro climate within the garden.

“One of these sections had collapsed so we had to find suitable old red brick to build it up again. The other collapsed section had been built as a dry stone wall. Here however all the stone was in place we just had to dig it out. It was well buried.”

The garden at Dunmore is full of flowers and as a result there are lots of bumble bees and they like nesting along the wall.

Amelia said this was why they waited till late autumn to completed the work.

She added: “We have the most amazing gardener, Andy O'Donnell, who has been with us for more than 60 years. Andy has the most incredible wealth of knowledge when it comes to gardening. He looks after the garden along with two young helpers, Trudy and Bernard.

“The Gardens are open to the public from April until the end of October, mid-week, from 9am to 5pm.

“We might have them closed because of weddings at the weekend during the summer but we would let people know this via social media. We are really looking forward to welcoming everybody back in 2022.

“The garden was built around 1800 and it was restored during The Famine. The gardens are listed and are clearly marked on early maps, including the Griffith Valuation map of 1858.

“I think GLAS is a wonderful programme run by the Heritage Council for the Department of Agriculture. It allows us to save beautiful old buildings for future generations.

“The programme has also allowed us to restore an old stone shed which is now in active use as a stable.”