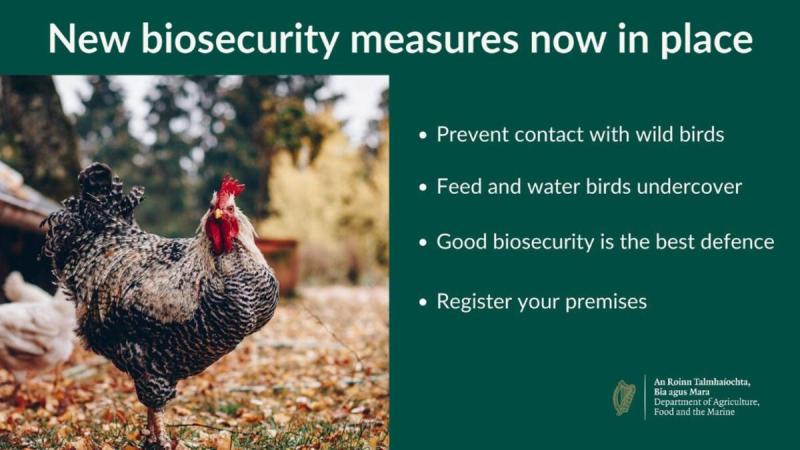 The Department of Agriculture, Food and the Marine has introduced enhanced biosecurity measures as a precaution against High Pathogenic Avian Influenza.

Avian Influenza H5N1 has been identified in wild birds in Galway, Donegal, Kerry, Roscommon and Offaly

The regulations have been introduced under the Animal Health and Welfare Act 2013 and require flock keepers to apply particular bio-security measures for poultry and other captive birds as a precautionary measure against Highly Pathogenic Avian Influenza (HPAI), as well as a ban on the assembly of birds.

These precautionary measures against avian influenza (bird flu) come into effect on 17 November 2021.

This initiative is being taken following confirmation of HPAI H5N1 in wild birds in a number of counties since early November.

These wild bird findings confirm that the avian influenza virus is currently circulating widely in the wild bird population in Ireland. This reservoir of infection in wildlife poses a risk to our poultry flocks and industry. There have not been any outbreaks in poultry flocks at this time.

These Regulations require specific biosecurity measures to be implemented by the keepers of all poultry (and other captive bird) flocks, irrespective of size, to help mitigate the risk of infection of their poultry from the virus and the implementation of additional enhanced biosecurity measures by flock-owners in respect of flocks of 500 birds or more.

Since October the HPAI H5N1 subtype has been responsible for disease in wild birds and outbreaks in poultry and captive birds in a number of EU Member States and Great Britain. No cases have been identified in Northern Ireland to date. The Department maintains close contact with our counterparts in the Department of Agriculture, Environment and Rural Affairs in evaluating and managing the risk of avian influenza on the island.

Poultry flock owners should remain vigilant for any signs of disease in their flocks, maintain strict biosecurity measures and report any disease suspicion to their nearest Department Regional Veterinary Office, even if they only have one or two birds.

The Health Protection Surveillance Centre has confirmed that although the HPAI H5N1 subtype can cause serious disease in poultry and other birds, no human infections with this virus have been reported world-wide and therefore risk to humans is considered to be very low. Properly cooked poultry and poultry products, including eggs are safe to eat.

Members of the public are advised not to handle sick or dead wild birds and to report any episodes of sick or dead wild birds to the Regional Veterinary Office or contact the DAFM disease hotline on 1850 200456. An early warning system is in place with Birdwatch Ireland, the National Parks and Wildlife Service and the National Association of Regional Game Councils with regard to surveillance for signs of disease in wild birds.

The Department continues to closely monitor and assess the disease situation and is in regular contact with industry stakeholders.

Avian Influenza H5N1 has been identified in wild birds in Galway, Donegal, Kerry, Roscommon and Offaly

Clinical signs that poultry keepers should look for in their birds include a swollen head, discolouration of neck and throat, loss of appetite, respiratory distress, diarrhoea and fewer eggs laid – although these vary between species of bird.

If you find dead wild birds such as wild ducks, wild geese, swans, gulls or birds of prey, do not handle the birds. Report the findings to the Department as above.