The stunning Marie Antoinette inspired creation was a big hit 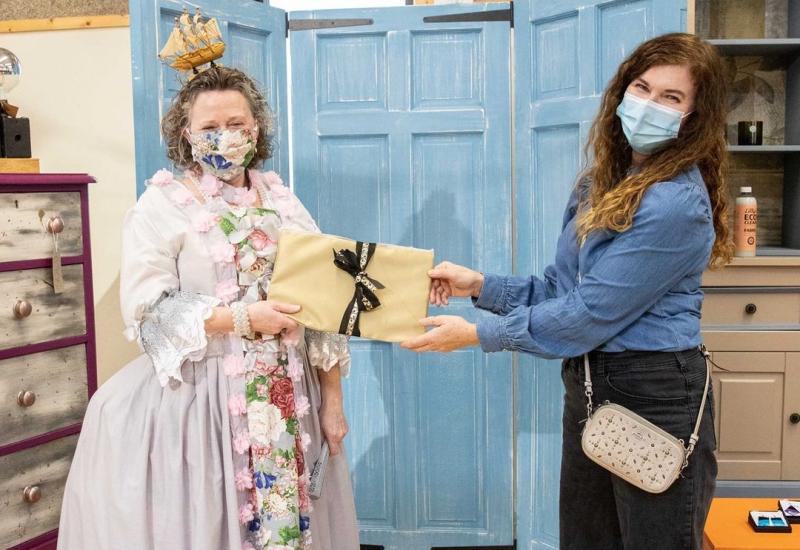 A Donegal Town woman known locally for her incredible upcycled costumes is among the winners in the national Upcycle Challenge 2021.

Niamh Coughlan’s Marie Antoinette inspired dress made from old curtains and sheets certainly captured the imagination, finishing first in the Public Vote category nationwide. The Lough Eske woman is thrilled to have won this category and is most grateful to everyone who voted.

Her success will be no surprise to those who have witnessed Ms Coughlan's fantastic creativity in the wider Donegal Town area. Her imaginative and skillful creations have delighted visitors to the Killymard Old Fair Day and the Donegal Railway Heritage Centre. She has even been known to don her period costume for some of her Donegal Town Walking Tours.

Organised by MyWaste, the socially distanced final took place at the Rediscovery Centre on Tuesday. MyWaste was joined by 22 finalists who were shortlisted from over 260 applications.

For this competition, people from all over Ireland were challenged to find something that is no longer in use and transform it into something new. The applications were then judged by RTE’s Róisín Murphy, Enda O’Dowd product design lecturer at the National College of Art and Design and Declan Breen Regional Waste Prevention Officer at Eastern-Midlands Waste Management Region.

Judge Róisín Murphy of RTÉ’s Home Rescue said: "The quality of the applications to this year's Upcycle Challenge was exceptionally high. I was blown away with some of them and if I saw them for sale, I would want to buy them for my own home.

“It was hard to judge them as they showcased such amazing creativity but I am looking forward to seeing more creations in the future from these passionate upcyclers."

“Each year this competition gets bigger and better,” he said. “The creativity shown by the applications was inspiring.

“The applicants have actively searched out items that would have normally gone to landfill and upcycled them. They made some amazing, usable and creative items and it made judging them very hard. The judges had such a difficult decision to make but we were eventually able to pick a winner from all of the fantastic applications.

“I want to congratulate all of the finalists for getting this far and of course the winners of the competition.”

The winners of the Upcycle Challenge 2021 are: