UPDATED: Donegal battling Storm Barra and a Status Orange wind alert since 2am 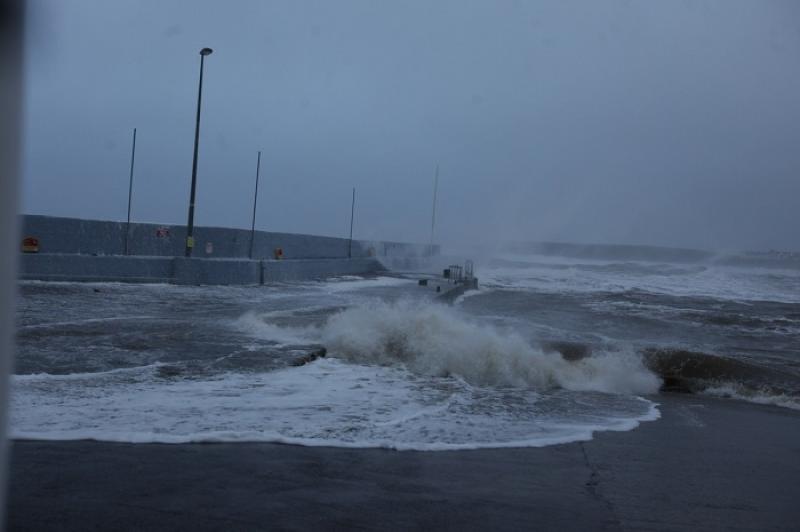 Donegal has been bravely battling Storm Barra since the early hours of this morning as an Status Orange weather wind alert has been operational since 2am and is set to continue until 2pm this Wednesday afternoon.

Donegal County Council have said that a number of temporary road closures due to fallen trees in a number of areas throughout the county including St Johnston, roads around Lough Eske outside Donegal Town and also just past the Abbey Vocational school heading towards the Tullyearl junction in Donegal Town.

The Harry Blaney Bridge in the north of the county is again closed today.

The first high tides of the day along the Donegal coast came just before before 8.30am bringing a storm surge that enveloped many lower areas around the coast.

A status yellow rain warning also remains in force until 6pm this evening.

Seventy-six (76) households lost power just before 9pm on Tuesday night in the Kilcar area and it was hoped that power would be restored by 4pm this afternoon.

Another 19 households were affected in the Largynaseeragh/Carrick area, around the same time. Again repairs were hoped to be carried out by 4pm today, if not beforehand.

An outage only appears on the ESB Networks map when it affects more than 10 properties.

There was also a small outage this morning in Bundoran from 5.52am to 6.08am. Another 361 households in the seaside have lost power since 8.23am.

Just after 8.30am, 33 households lost power in Ballyshannon with an estimated restore time of 6.45am tomorrow, Thursday morning.

101 customers have been affected in the Killybegs area.

5,127 households were affected in the Creeslough area for about an hour between 6.30am and 7.30am.

654 customers in the Gaoth Dobhair area also were without electricity for a period from 5.52am when a fault was reported in that area.

112 households have lost power in the Derrybeg area since 9.35am with an estimated restoral time of 7.45am on Thursday morning, if not sooner.

68 households have been affected in the Ballyraine area of Letterkenny since 9.17am this morning, with an estimated restore time of 7.30am tomorrow, Thursday morning.

Last evening the Department of Education confirmed that all schools in the county were to close today.

The Department of Children Equality, Disability, Integration and Youth also advised that all early learning and care and school age childcare services that are currently or forecast to be in a Red or Orange alert area should remain closed today, December 8. This will allow for assessment of the impact of Storm Barra to take place.

During the duration of the storm conditions, Donegal County Council are urging road users to minimise their journeys and be aware of road conditions if travelling, particularly in relation to flooding and debris on the road.

Should you need to travel, extreme care should be exercised mindful of the conditions.  Please be aware of the potential of fallen trees, branches, electricity wires, debris on the roads and walk-ways and flooding in certain areas.

Last evening a Boil Water Notice for the area supplied by the Glenties - Ardara Public Water Supply to protect public health was issued.

The population impacted by this notice is approximately 3,518 people. This notice is being issued because of increased raw water turbidity caused by Storm Barra and as a result Irish Water cannot guarantee that the drinking water entering the Glenties - Ardara Public Water Supply is being properly disinfected.

Fallen Electricity Wires are live and dangerous. Never approach or touch them.