Daguerreotypes, unlike paper photographs, are unique items so there is only ever one copy 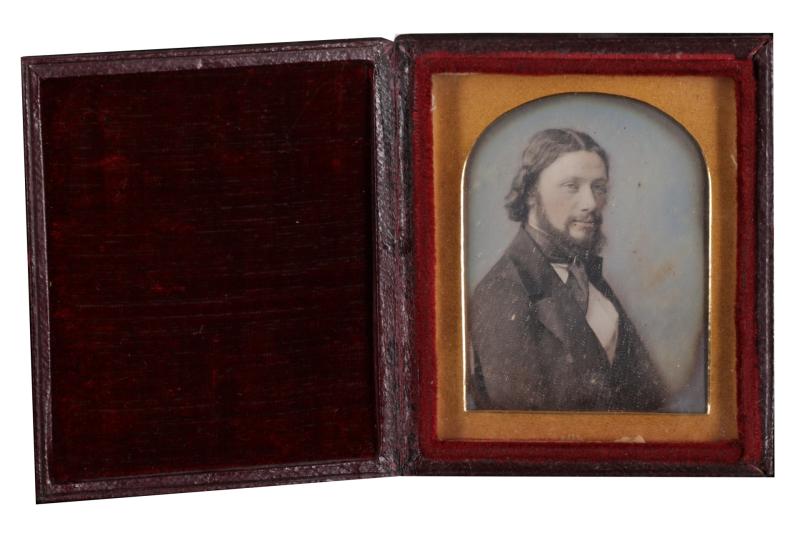 A rare Daguerreotype of Ballyshannon poet William Allingham has been sold in a London auction for £2,800.

The Daguerreotype was the first commercially successful photographic process in the history of photography. Named after the inventor, Louis Jacques Mandé Daguerre, each daguerreotype is a unique image on a silvered copper plate.

Austin Farahar of Chiswick Auctions told the Donegal Democrat /DonegalLive.ie: “In terms of rarity, Daguerreotypes, unlike paper photographs, are unique items so there is only ever one copy. In this instance, the plate has also been delicately hand coloured which gives it a beautiful and additional level of personalisation.

“I do not believe that any other photographic likenesses of William Allingham exist from this date (c.1850) however I have not been able to research this in great depth.

“The lot came from a London based photographic collectors estate. He had a collection of over 200 cased images and this was amongst some of the most notable Daguerreotypes offered.

“The price is a very good result for Daguerreotypes from anonymous photographers, and is obviously testament to the popularity of this Irish literary giant.”

The Allingham Daguerreotype was listed at Chiswick Auctions 19th and 20th Century Photographs sale on December 1. It was bought by Irishman Sean Sexton who it is believed has the largest collection of Irish photographs in the world.

The Co Clare native who lives in London said: “I have almost 25,000 photos of every aspect of Irish life, social history and politics; landed gentry, evictions, 1916, British troops in Ireland.

“Around half of the photographs in the ‘In Our Own Image’ exhibition in Dublin Castle at the moment are from my collection.”

Mr Sexton is passionate about the art of early photography and of how Irish life was documented through the evolving art form. He dedicates a lot of time and resources to building his collection.

“I get photographs from the big auction houses like Sotheby’s and Christie’s in London and Whyte’s in Ireland,” he said.

“I also get them from fairs and markets.

“Each piece gets in on merit. There has to be a story in the picture. I really liked this image of Allingham. There are images of him when he was much older, but he is a young and very handsome man in this picture. It is quite striking.”

The lot was listed with a guide price of £150 to £200. Mr Sexton doesn’t know how many other bidders were involved, but there were certainly enough to push the price up to £2,800.

He is delighted to add the Donegal poet to his collection.

The son of a bank manager, William Allingham was born in Ballyshannon in 1824. Though of English nationality Allingham considered himself to be first and foremost a Ballyshannon man, always  referring to it as his hometown.

From superstition and folklore to the desperate plight of the poor and oppressed, no-one conveyed the story of 19th century Donegal quite like Allingham. Perhaps best known for the magical children’s poem The Faeries, he also captured the harsh reality of the era in poems such as The Eviction, and The Girl’s Lamentation.

His work with Customs brought him all over the UK but his heart remained in Ballyshannon. Following his death in 1889, Allingham’s ashes were brought back to the Erneside town and buried in the grounds of St Anne’s Church.