Leon Brennan, a man with a huge heart who always put other people first, is laid to rest 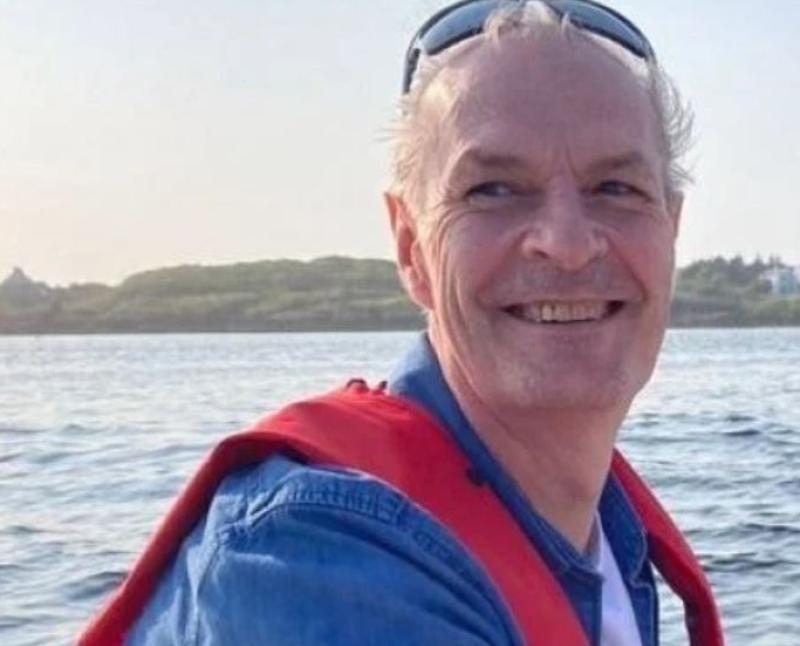 Leon Brennan was remembered as a man who had a huge heart filled with kindness and who always put other people first, at his Funeral Mass in Gaoth Dobhair, by an tAthair Brian Ó Fearraigh, this afternoon.

The Funeral Mass of Leon Brennan was held at St Mary’s Chapel in Derrybeg. Leon passed away surrounded by family in  Dublin last Friday morning following a valiant battle with illness.

At the beginning of the music-filled Mass, gifts were brought to the altar by Donál Duggan and Aisling Jarvis, Leon’s god children, which symbolised Leon’s life, amongst which were eye glasses which Leon finally succumbed to when he realised he needed them to read the sports pages; a Donegal jersey and a Gweedore Celtic jersey which depicted the passion Leon had for his county and his time with his much-loved local team during the 70’s and the 80’s; a laminate which represented his organisational skills in his work with Clannad; his peaky blinders cap which Leon warmly embraced as his ‘new look’ when he began treatment; a sports books to portray Leon’s great love of reading about those in the world of sport; a wedding photo of Anne and Leon’s wedding day, a truly precious day, in March 2000; his phone which was never far away from him and finally a wedding band which his wife Anne had placed on his finger a week last Monday.

Those present heard that Leon lost his wedding band while on Gola Island in August. On discovering where the ring had been purchased, his sister, internationally recognised singer and composer,  Enya, had recently replaced it.

An tAthair Brian Ó Fearraigh who celebrated the Mass described Leon as having a huge heart filled with love and kindness and a nature that dictated he always put other people to the fore.

Leon Brennan from upper Dore was the tour manager with Clannad and was well known across the nation and further afield. His death ignited huge sadness across the county and many people from across the world and those associated with the music industry took to social media to pay tribute to him.

Father Ó Fearraigh offered his heartfelt condolences to all those associated with Leon on his behalf and on behalf of an Dr Ró-Oirmh Pádraig Ó Baoghill who could not be present at the Funeral Mass. He welcomed all those who attended the Mass both online and in Derrybeg. The Derrybeg-based priest said originally he had considered keeping the Mass somewhat short and then had asked himself ‘what would Leon do if he was standing here?’ He then told those gathered that they could be present for a couple of hours as they knew and appreciated how much Leon loved to talk and tell stories.

During a Mass where the message of hope and everlasting life was predominant, Father Ó Fearraigh said it was natural people would be sad in times of death adding that death leaves a gap in our life and makes us shed tears. However, he told people to have hope and to enjoy the times and the memories they shared with Leon during his life.

During an eloquent and moving Mass, an tAthair Brian said it is possible to fall into the pit of hopelessness and despair especially at Christmas time but added that Leon would not want people to feel sad.

“We are a people of hope … Leon was a man of faith and his faith was incredible - a faith in the promises of the Lord and a hope in the kindness and goodness of other people around him as well. It was that faith and hope that led Leon to always think of others before himself. Even on his death bed thinking of others and putting others first. Leon was always about doing for family - doing for Ann and Leon óg and Anna. Doing for family and friends to bring them happiness,” he said.

Those gathered heard that there were times when love and laughter filled the homes of those associated with Leon. An tAthair Ó Fearraigh said that Pól, Leon's brother, had mentioned the word ‘togetherness’ last night, Monday, and spoke of the significance of the word.

“And in the face of death we certainly must not forget that Leon faced his death with courage. Leon carried many crosses during his illness but as we all know he bore those with patience and with courage and we can say here today with certainty that that was a sure reflection of his great character and, indeed, his faith, that he held dear,” those gathered heard.

Beautiful music complimented the wonderful Mass in which Daniel O’Donnell sang ‘You raise me up’ and Maireád Ní Mhaonaigh contributed on fiddle and in song. Clannad played during the Mass and Moya Brennan and Cormac de Barra made wonderful contributions to the Mass which was watched by hundreds of people online. Two choirs, the Derrybeg Chapel choir, a choir to which Máire Ní Bhraonainn and daughters Enya and Moya, greatly contributed to over the years sang alongside the Mín Uí Bhaoill choir.

At the end of Mass, an tAthair Brian Ó Fearraigh said he had given his blessing to 'Baba' Máire Ní Bhraonainn who had taken ill during Mass.

Leon was laid to rest in his native home of Gaoth Dobhair in the nearby graveyard of Machaire Gathlán.