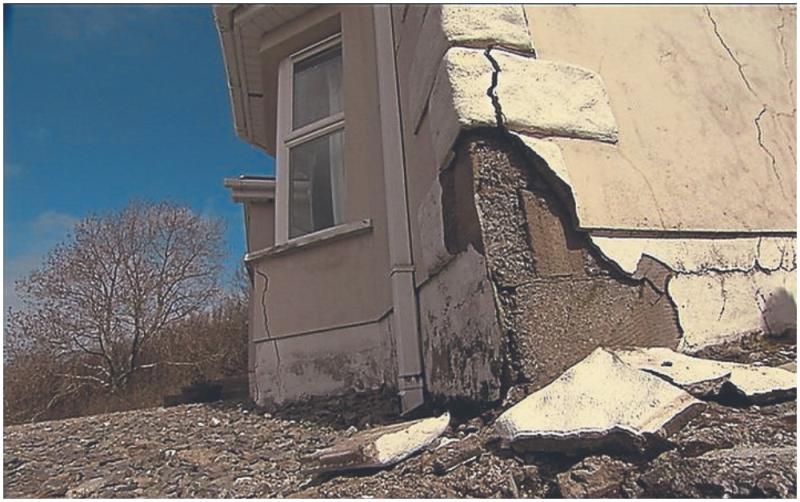 On November 30, Housing Minister, Darragh O'Brien, announced what he described as “enhancements” to the Defective Concrete Block Scheme.

Speaking to the Inish Live, Mary Morrison, whose parents, Paddy and Sheila Morrison, hail from Urris and Clonmany respectively, said she had many, many family members and friends affected by mica.

She explained: “This is the motivation behind my involvement in the redress campaign.

“On Boxing Day past, I set up the 'Redress / Compensation for Mica / Pyrite / Sulphate Victims' Facebook page and I am currently building a website: www.mpsvictims.com.

“I have decided to do so, partly because I was shocked when it emerged the government-established Working Group on the Defective Concrete Blocks Grant Scheme was in the offing before the first redress rally in Dublin on June 15, but homeowners and some campaigners were not told.

“I was asking questions on social media about the 'new' scheme and I felt I was getting nowhere. No answers were forthcoming. In the end, I was blocked from a certain page and I thought, 'This is not right. I am just asking questions because I can see possible pitfalls, things which might go wrong, with the 'new' scheme'. I thought, 'Have people seen the scheme? Have they read it properly?'

“We believe that a lot of these victims are going to be left in a position where they will not be able to claim full redress for their losses because of a revised scheme that has too many inconsistencies and gaps. Victims could end up having to take out additional mortgage loans for tens of thousands in order to be able to rebuild their homes, this is absolutely unacceptable and we refuse to allow that to happen.

“Whether you are fighting for your primary residence, a rental investment, a holiday home, a farm building, a commercial building, you used your money to purchase the property or the materials to build that property in good faith and you are a victim of corruption and white collar criminal activity.

“We refuse to stand by and allow ourselves to be treated like we are being 'granted' money by a government who are directly responsible for creating this situation through light touch (non-existent) regulation.”

She added that the 'Redress / Compensation for Mica / Pyrite / Sulphate Victims' group had taken it upon itself to stand firm and say, 'No! We will not accept any less than full redress for our losses. We will not pay one more cent for our homes. We are victims. We should be fully recompensed for our losses and we intend to ensure that this happens for each and every victim, whatever their circumstances'.

Ms Morrison said: “I began by providing the contact details and email addresses of various groups, so people could send emails to them, telling their stories, explaining why they are not happy with the Scheme. I wanted to get the word out there and I think people are doing that now.

“The next thing I did was to examine the 'enhanced' scheme itself point by point. I am currently at Point 32. This process sparked additional questions by group members, which I have acknowledged and gone back with to the Housing Minister.

“Every night, before I shut down, I make a point of going onto every post, to make sure I have not missed a comment or a question or a query because this is not just my affair, this is people's lives that are at stake and they need acknowledged. They need their answers and I don't want anybody to feel they are not being listened to. There is somebody out there that is going to go looking for your answers.”

Ms Morrison spoke of the experience of a young man who bought a house in Letterkenny in March 2020, which is two moths after the cut-off date for the 90 / 10 scheme.

She said: “He found out, after he had spent a lot of money on the house and moved in, there were cracks on his outside walls and the other houses in his estate also had cracks.

“When he approached Donegal County Council about joining the 90 / 10 scheme, they were not very helpful.

“He contacted me directly and I obviously wrote to the Housing Minister and said their should not be a cut off date because nobody had any idea or control over when these cracks are going to start to develop.

“I also contacted the Property Services Regulatory Authority, which controls and regulates property services providers including, auctioneers, estate agents, letting agents and management agents and has a complaints investigation and redress system for consumers. My approach is that the pen is mightier than the sword.

“I just want people to know the reasons why homeowners cannot accept the 'enhanced' scheme as it stands. I am not saying stop the scheme but the Government has got to take it seriously. The very fact it introduced a 90 / 10 Scheme in 2019, was its admission it was aware of the problem.”

Ms Morrison said she was shocked was shocked when the Government came back with another proposed scheme, which was worse than the first one.

“This is just delaying tactics,” she said. “It is all cost cutting measures. Where this will end up I have no idea. I do know that some people who are affected have contacted solicitors, Coleman Legal at: defectiveblocks@colemanlegal.ie and are exploring their legal options,” said Ms Morrison.