But bitterly cold with multiple areas of spot flooding on roads

South Donegal appears to have avoided much of the snow that fell in other parts of the county overnight, but it was bitterly cold there with multiple spot flooding on the Finner Road between Bundoran and Ballyshannon.

There was also spot flood on the main N15 between the two southern Donegal towns, but not as bad as the regional roads in the area. Spray back from lorries and larger vehicles was particularly evident with driving conditions difficult but passable.

Ballyshannon was also extremely storm but again not showing the remnants of any snow that is said to have fallen overnight.

Residents in both towns said that there were some heavy outbursts of hailstones but that apart from their still showing the effects of the overnight deluge, driving was relatively ok, part from the earlier mentioned spot flooding that not only affected the roads, but was clearly evident in fields throughout the area. 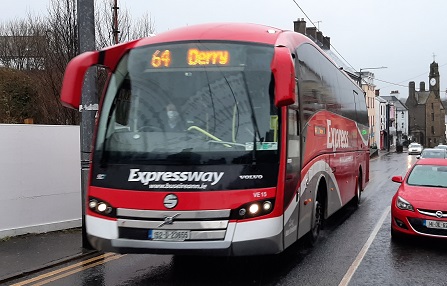 THE GALWAY DERRY EXPRESS HAD NO PROBLEMS IN SOUTH DONEGAL

The morning Derry Express also had little problem in the southern end of the county, but conditions further up the county may be more problematic for all journeys.

Watch: Very stormy conditions but no snow in Bundoran

Met Eireann say that a moderate yellow weather warning for snow-ice for Donegal with falls of sleet and snow will continue throughout Friday and into Saturday morning.

THE VIEW FROM CORNHILL THIS MORNING HEADING INTO BALLYSHANNON. All Photos Michael McHugh

This will see  accumulations in some areas and icy stretches leading to hazardous driving conditions.
The Yellow Snow/Ice warning is valid until 10am on Saturday morning and affected areas include Donegal and all other counties, according to Met Éireann.A moderate/yellow Weather Warning for Wind for Donegal has also been issued by Met Eireann.
They say that Northwest winds backing westerly will reach mean speeds of 50 to 65km/h with gusts of up to 110km/h on Friday, coupled with heavy rain at times.