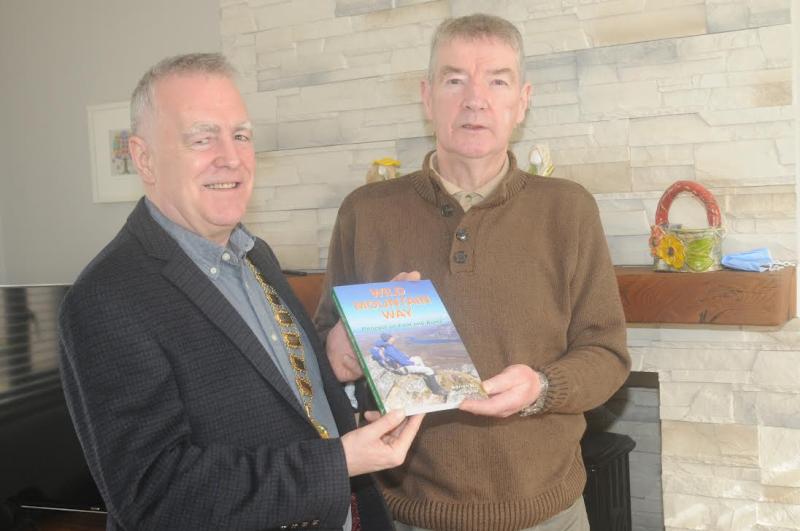 Cllr Jimmy Kavanagh, left with Adrian Gallagher at the launch

When mountaineer and author, Adrian Gallagher, saw Charlie Bird on the Late Late Show in January, he was astounded by Charlie’s courage and resilience in the face of adversity and so he determined that he would try and help as best he could.

With Charlie’s blessing, Adrian now plans to auction a copy of his own book, Wild Mountain Way – Donegal on Foot and Alone, that has been signed by Charlie, with all proceeds going to the Climb with Charlie charity campaign in support of the Irish Motor Neurone Disease Association and Pieta.

In his book, Wild Mountain Way – Donegal on Foot and Alone, that was launched last June, Adrian Gallagher, details his experiences, recollections of and reflections on his trek on foot across Co Donegal, which linked the various mountain ranges of a very mountainous county, on a unique four hundred kilometre journey. 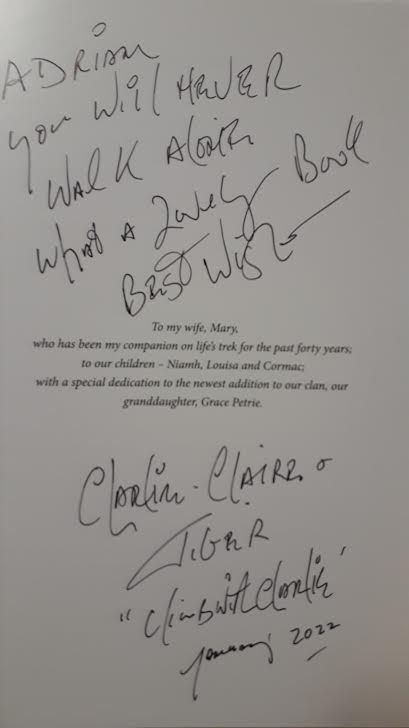 The signed copy by Charlie Bird

All profits from the book are going to support the charity, Down Syndrome Donegal, and already the charity has received €5,000 with further payments due to be handed over to them shortly.

Councillor Kavanagh said that he was delighted to back Adrian Gallagher’s effort, as it assists two very worthy causes in the Irish Motor Neurone Disease Association and Pieta.
He also stated that the book itself is a beautiful production and he wished the author and Down Syndrome Donegal every success in selling the last few hundred copies that are still available for sale.

Bids for the signed book can be laid by sending your name, phone number, amount you are bidding in euros, by one of the following methods:

Only bids received by 12 midnight GMT on April 7, will be considered and the winning bidder will then be contacted as soon as possible.

Terms and conditions apply and can be had by request through any of the above means.