New enterprise will be influenced by Donegal's wild landscape 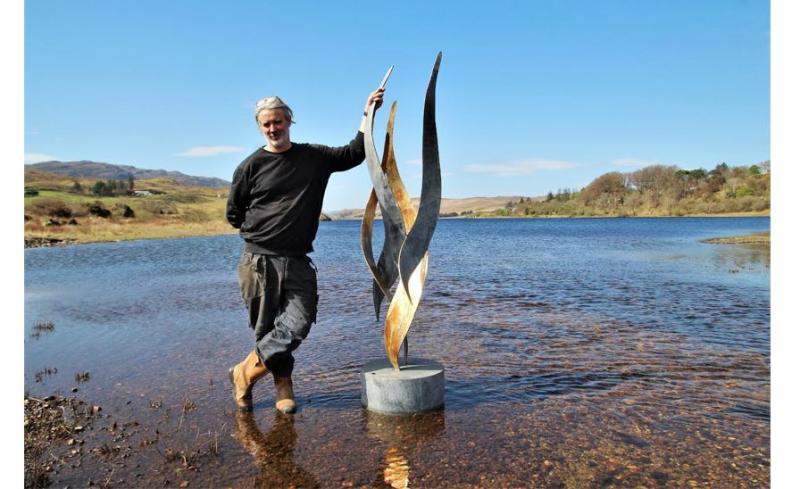 John Collins with his metal sculpture called Emergence. It will provide the centre piece for his display at the prestigious Chelsea Flower Show Photo: Joe Brennan

Inspiration and imagination provide a potent mixture but when added to the natural beauty of the Wild Atlantic Way and the flora, fauna, and rugged peaks of Donegal you are on to a winner.

Translating all that into metal is another thing but for a 56-year-old creative metalworker, John Collins, it's all in a day's work and one that will see his finished products hold centre stage at this year's Chelsea Flower Show in London.

So how does a seemingly innocent sheet of steel in Fintown end up being admired by the great and the good at this prestigious event? That's a story in itself.

John is a native of Limerick. He lived in the UK for over 25 years and believed he had reached the stage in his life that if he didn't move home now he never would.

"I had friends who sent up a retreat house called The Song House in Falcarragh. I visited them and just fell in love with Donegal. There's something about the coastline. When you walk around somewhere like Magheroarty beach and you see the colour of the sea, Tory Island and you turn around and get the mountains, this as a visual creative artist, you come to understand how the landscape shapes how your creative imagination works."

He adds the feeling was compounded after he read an article by Fintan O'Toole in The Irish Times about Brexit. It was his epiphany moment, he says.

"He (Fintan) was speaking about how the Brexit debate had become a conversation about English nationalism and how it felt disenfranchised, not being a part of Europe. That placed a crystal clear kernel thought in my head about where I wanted to be when I'm 75. I thought, 'I don't want to be here.’"

He made enquiries about relocating and through conversations and pointers from friends contact was made with Údarás na Gaeltachta, the regional authority responsible for the economic, social and cultural development of the Gaeltacht.

"I met Seán O Gallachoir and Dónal Mac Eiteagáin last May and they were incredibly helpful. They drove me to a number of locations but when they took me to Fintown and you see the lake and mountains I knew this was right."

Company
After overcoming all the logistical challenges of moving equipment to the unit, John transported the rest of his life to settle in Gortahork and set up his new company, Miotalóireacht Ealaíne Teoranta t/a John Collins Designs Ltd. 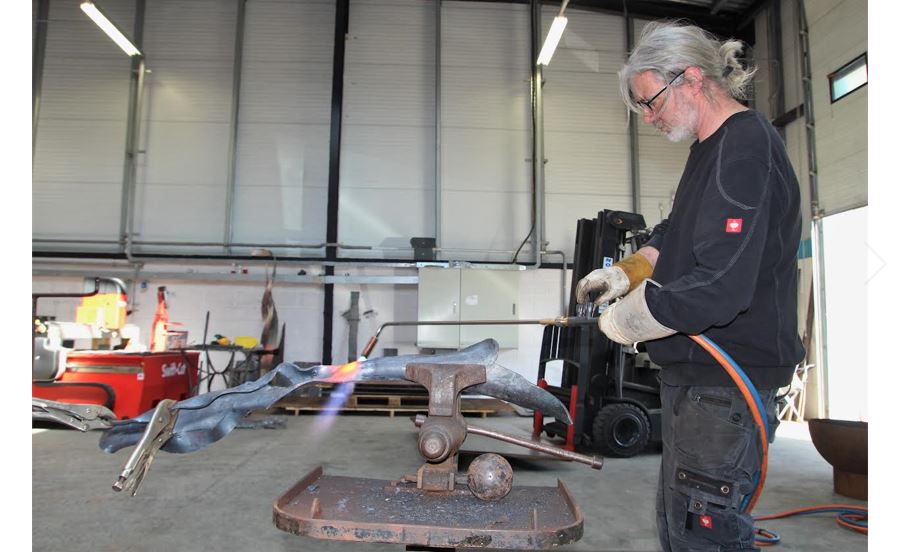 "I know it's a bit of a drive every day but there's something about the landscape. Indeed at times, it's hard not to stop and take in the light, the clouds or the colour of the bog. It's stunning.

John hopes to have an open day sometime in June to introduce himself to the local community. He took part in a trade fair showcase back in March in Dublin and generated plenty of interest there

He is now hoping the Chelsea Flower Show will generate enough orders to keep his business going for the rest of the year.

"Moving over here was definitely a creative upgrade. When I was in the UK the focus was solely on building up an economic base, how much you can turnover, how much you can sell. I'm not naive, I still have to think about that but I'm also trying to make things I enjoy making. I have invested in equipment to make the modern-day creative blacksmithing much more efficient."

Base
John has been taking part in the Chelsea Flower Show in one form or another for the past 15 years but this will be a first coming from his Fintown base. He is looking forward to presenting his Donegal influences at the world’s greatest flower show and using his unique work to complement the stunning garden designs and gorgeous floral displays.

He will have a six-metre by five-metre stand and will spend two days building a garden before adding their unique products in the hope the public will respond and order some. Indeed John's company has been shortlisted for three years in a row for the best new design display at the show so they have already built up a reputation.

"We will be doing a mixture of sculptures for your aesthetic pleasure as well as functional sculptures such as decorative things like bird feeders, water features, and birdbaths. I really love the old arts and crafts movement philosophy that you should never have something in your home which isn't useful and isn't beautiful."

Catchphrase
He points out that the company catchphrase on their website is Made, Not Manufactured.

"If you were to pick up one of our pieces you would instantly know this has been made by human hands. It isn't as if hand-made is superior, handmade would be more expensive but there is room for the manufacturing element in design and room for the hand-made element.

"We have invested smartly over the years in the right sort of assembly lines so that we can make something hand made but we can make it efficiently.

"There is a challenge as a craft worker in making beautiful items. If an item takes a few days to make you need to charge for it but there's only a small percentage of the population that would be able to afford it whereas we try to make things efficiently and broaden our market.

He adds he researched the fabric industry in Donegal and learned about its efficiencies.

John's work certainly does have a pleasant, positive or artful appearance, even in the factory workshop and despite the surrounding industrial sounds and the clash of the metal. He says his love of metal and making it move transforms them from vertical or horizontal lines or circles into textured shapes with a three-dimensional aspect thanks to a hydraulic press. Basically, we bring them alive.

The centrepiece for the Chelsea show is called Emergence. It will be one of 15 unique sculptures on show.

He is in no doubt that his new surroundings in Donegal have played a major role in new design concepts for his work.

"Just take a walk on Magheroarty beach for example. The seaweed offers up all kinds of shapes and designs. You never get bored of them and I've no doubt they've seeped into my creative imagination and are now coming out in the stuff I'm making.

John is already planning to take part in Paris Design Week next year and promises he will be taking his Donegal-influenced shapes and designs to feature in that show.

"If that's a success I would like to bring those designs to New York. These designs will be shaped by my life experiences." 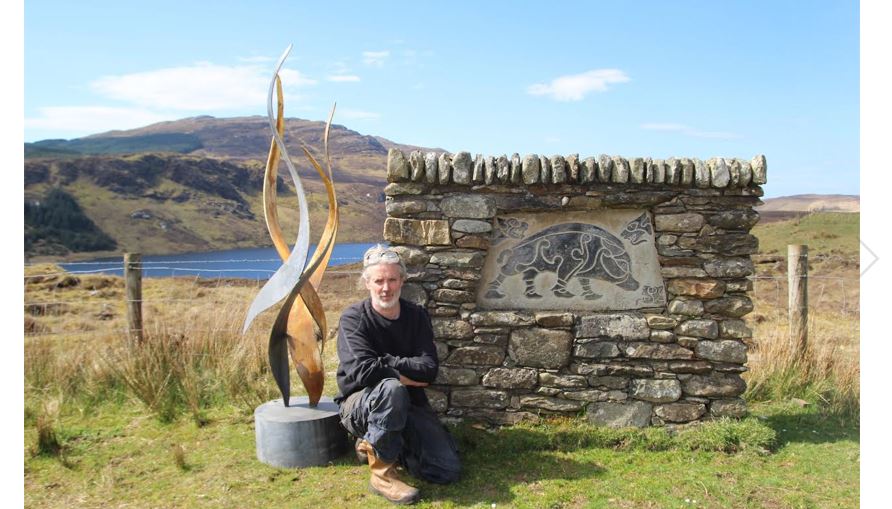 John and his steel sculpture beside another local landmark, the memorial

He adds he is fascinated by how his new landscape is changing him.
"I thought that was just the stuff of poetry but I'm now actually aware of it. When I'm driving home I often pull in at Doochary village with a lake not far from it. You are looking at those granite stones which have been there since the Ice Age and it gives you a sense of time and your place within the landscape. I didn't have that in south-west England."

John sees potential for growth and the transfer of skills for future generations. He plans to travel the length and breadth of the county sourcing out new ideas and viewing new vistas for projects.

"It's one of the things I'm enjoying at this phase of my life, being able to bring something that will be a contribution to the community and in some ways - all of us are going to pop our clogs sometime - leave something for the community.

"When I moved here I wanted to brand the landscape but also the language. I'm not just ticking an Údaras box, I want to have it in places like Paris and New York on my products. It's a beautiful language. I will be so proud of that."