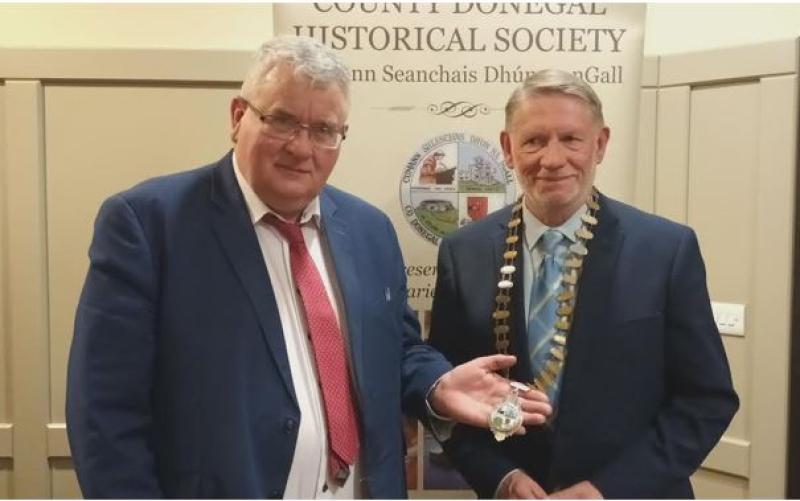 Seán Boner, outgoing president of the Donegal Historical Society, left, hands over the chain of office to the new holder of that position, Rev Raymond Blair

Donegal Historical Society’s new president, Rev Raymond Blair has promised to inject a new degree of enthusiasm into all things historical during his term in office.

He was speaking at Tuesday night's annual general meeting in Jackson's Hotel, Ballybofey.
This was the first annual gathering of members since 2019 as meetings had to be postponed due to Covid-19 regulations.

Rev Blair is a native of Cavan Upper, Stranorlar. He attended Cooladawson National School before moving on to the Royal School, Raphoe then Trinity College, Dublin where he attained a history degree. He then went into ministry with the Reformed Presbyterian Church and served in Galway for over 20 years.

He is currently based at the Limavady congregation where he has worked for the past 11 years. He is married to Carol and the couple has four daughters.

He still returns to the family home regularly. He has also authored a book, The Best of Frances Browne - Poems, Stories, and Essays by the Blind Genius of Stranorlar.

He told the meeting his aim for the year is to generate as much enthusiasm as he can for all matters historical.

“History is seen as irrelevant in this very technological, computerised age so you really have to get across that it matters. To understand the present, you have got to see it in the light of the past,” he said.

“To understand where we are now, you have got to understand how we got there and if you don't, you only have so much of the picture.”

The meeting heard reports from various officers on the working of the society during the break and how they are now looking forward to resuming their activities such as field trips and visits to historic sites.

Tributes were paid also to outgoing president Seán Boner, secretary, Una McGarrigle, and treasurer, Helen Meehan who did not seek reelection to these posts. They were each praised for their valuable contributions over many years.