Donegal’s Ois Bosh is set to rock Dublin once again this Thursday! 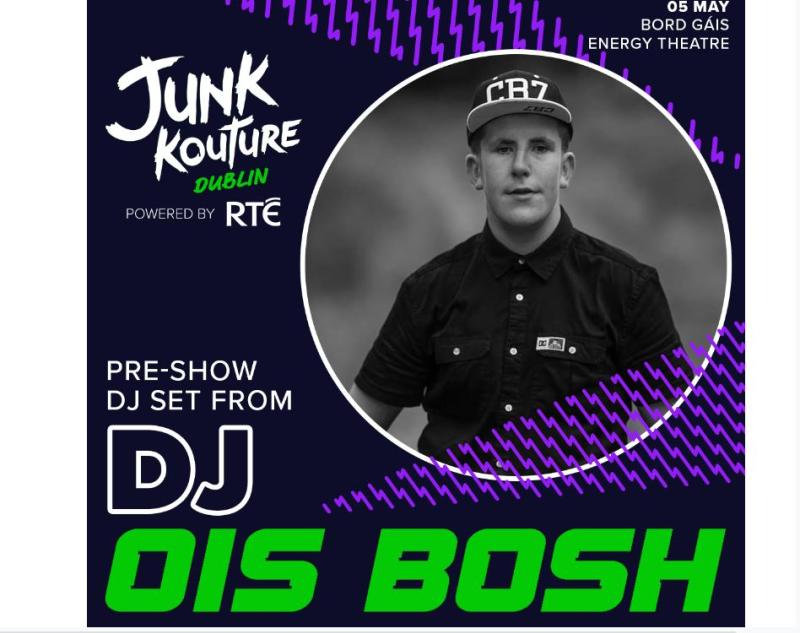 The Muff student, who is known as ‘Ois Bosh’, will be taking to the Bord Gais Energy Theatre stage later this week to play in front of a crowd of up to 3,000 people.

Fresh off the back of an Easter tour of the Midlands labelled:‘Bosh Eggstatic’ which included two dates in Cavan and one in Westmeath, the 20-year-old was thrilled to announce that he will perform a warm-up set once again for the Dublin City Final (formerly Grand Final) of the ever-growing Junk Kouture competition this Thursday, May 5.

Oisin said: “I can’t wait to walk out onto a sold-out Bord Gais and do what I love. Having played the 3Arena in 2019 as part of the Junk Kouture final, if it’s anything like my set in 2019, then it will be something else. That was an experience of a lifetime”

The sold-out Junk Kouture Dublin City Final powered by RTÉ will see 60 Irish designers on stage in the Bord Gais Energy Theatre perform in their incredible Junk Kouture designs with the hopes to move on to the first-ever Junk Kouture World Final later this year!

Thirteen different designs from Donegal will take to the stage with entries from Deele College Raphoe, Scoil Mhuire Buncrana, and Loreto Milford to name a few.

Ois Bosh will also share the stage on the night with artists such as Robert Grace and Soulé.

The talented DJ said lastly he couldn’t have reached this milestone without the support of his fans, who he calls his ‘Boshers’.

“A vlog of the whole experience will be available to view on my socials a few days after. Thank you for your support over the past five years and roll on Thursday!”