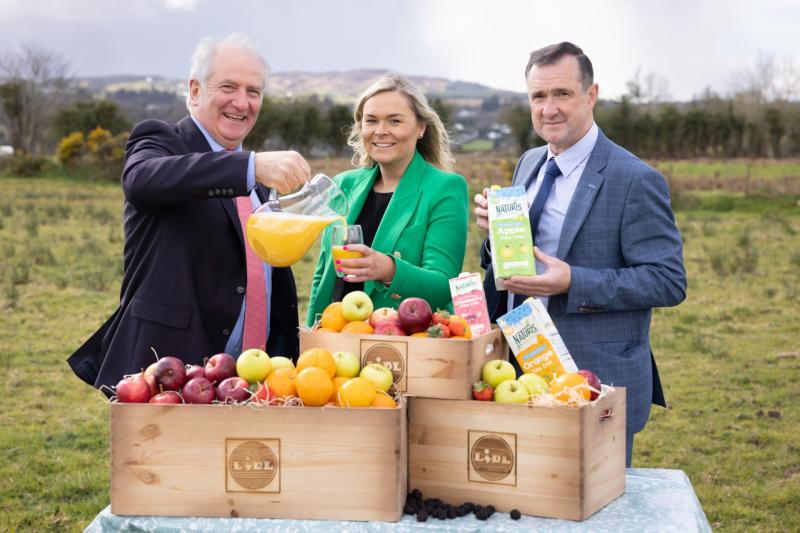 Lidl Ireland has announced a new deal worth more than €8 million with Donegal juice and smoothie producer Mulrines.

The new multi million deal will see Mulrines premiere juices and smoothies feature on shelves across Lidl’s 210 stores throughout Ireland and Northern Ireland as well as a number of stores in Great Britain.

Mulrines were established in 1919 in Ballybofey by Peter Mulrine, a draper and publican. Over the past 100 years the family business has grown strength to strength.

Starting as a local wholesale beer and soft drink bottling business the company has passed through three generations in the Mulrine family.

The company entered the aseptic fruit juice market in 1982. They now operate three sites in Ireland and the UK, including the headquarters in Donegal, an orchard in Kildare and a production facility in Wales.

The premium juice and smoothie supplier have been working with Lidl since 2009, when they started supplying a private label no added sugar fruit juice pouch pack. Currently Mulrines produce a variety of eleven fruit juices and smoothies for Lidl, with the addition of four exciting new products for 2022.

Welcoming the multimillion contract extension, Company Chairman, Peter Mulrine said: “At Mulrines we strive to provide premium products and to build long lasting business relationships. We have been working with Lidl for over 13 years and are delighted to sign this new deal that will see additional growth in our already existing partnership.

"We have been operating our business for over 100 years from our headquarters in Donegal. Securing deals like this with Lidl advance new innovations in the business that positively contribute to the surrounding area through local investment and job creation.”

Following the success of Mulrines products with Lidl’s customers, the retailer confirmed the contract extension worth more than €8 million. The new deal with Lidl has had a significantly positive impact on their operations, with the premium juice and smoothie provider delivering quality premium products at affordable prices.

Commenting on the new deal Rebecca Buchanan, Buyer with Lidl Ireland and Northern Ireland said: “At Lidl we are proud to support local Irish suppliers and to bring the best of Irish produce to homes all across Ireland.

"We have a longstanding relationship with Mulrines and their team and are delighted to agree to continued business development through this new multimillion contract- this is the largest contract to date with Mulrines since commencing supply in 2009.

"The quality and taste of their produce are incredible, and our customers have shown this through an increase of demand in the past number of years.”