Caoimhe leaves her wheelchair behind after ten years

At five years old she was told she would never walk 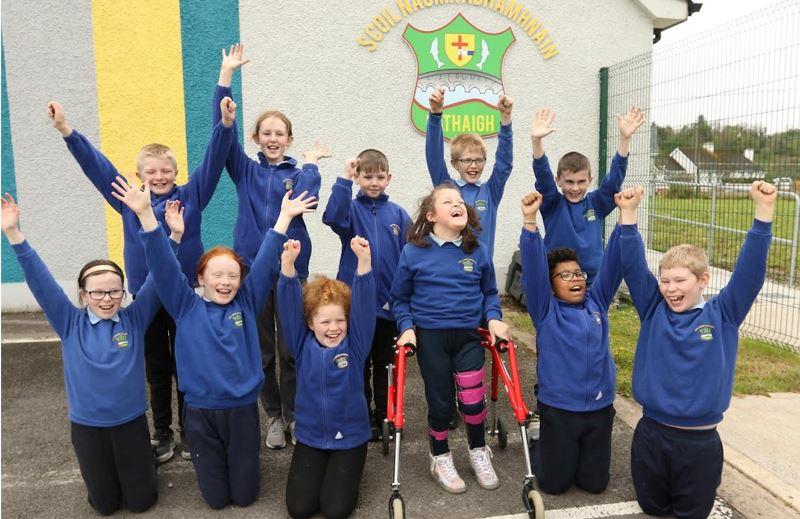 Caoimhe and her classmates celebrate her ability to walk to school

A 10-year-old Ballintra girl has defied the odds and gone from spending her life confined to a wheelchair to walking again with the aid of a special brace after only eight months of intensive therapy.

Caoimhe Darcy from Racoo, Ballintra could have been a wheelchair user for life but according to her mother, Noreen, her new found freedom is down to never giving up

Born premature at 27 weeks and 1lb 9ozs, Caoimhe spent the first five months of her life on a ventilator in Altnagelvin Hospital, Derry where she was born with cerebral palsy.

She had to go there because Letterkenny University Hospital did not have sufficient ventilators to support what was needed for her. When she came home she spent a further three years on home oxygen treatment.

Caomihe was discharged from the HSE at the age of five and told she would never walk, said her mother Noreen.

"She had been diagnosed with cerebral palsy so we tried everything. We were told she would never walk and would need powered mobility for life. She used a power wheelchair from that until last August. At that stage we tried to get her into sport We tried to get her swimming but we just couldn't get anybody to teach her."

A full-time wheelchair user up to last year, Caoimhne started with Swim Lab International in August 2021 and through their intense therapy weeks and with their remote support and guidance together with a weekly session with Donegal Town based Physio Éireann, she has dramatically changed the quality of her life.

She now swims regularly every week with County Sligo Swimming Club (CSSC) which is based at the Sligo Regional Sports Complex.

"Last August we went over to a company called Swim Lab International in Lanzorate and worked with them for two intensive weeks and she came home swimming. They gave us a home therapy programme to follow as well. We went over and back several times and they visited us and indeed we are due over again in July.

"Between them and Physio Éireann  for local home support we've all worked tirelessly to prove therapy does work. It just proved with the right intervention you can get results"

She added they could not have progressed without the help from the local St Eunan's National School in Laghey where Caoimhe is a third-class pupil. She said their inclusive attitude they would never have gotten this far.

"Her teacher, Anne Meehan, and the entire staff helped put the therapy in place in school.

They were continuing at school what we were doing at home and we needed that support. They didn't have to support us but they did and are so good.

"Caoimhe's hard work and dedication to achieve her goals have meant she is now ready to move from the therapy room into the real world and use all her new skills in a real environment. Hard work pays off and now the sky's the limit." 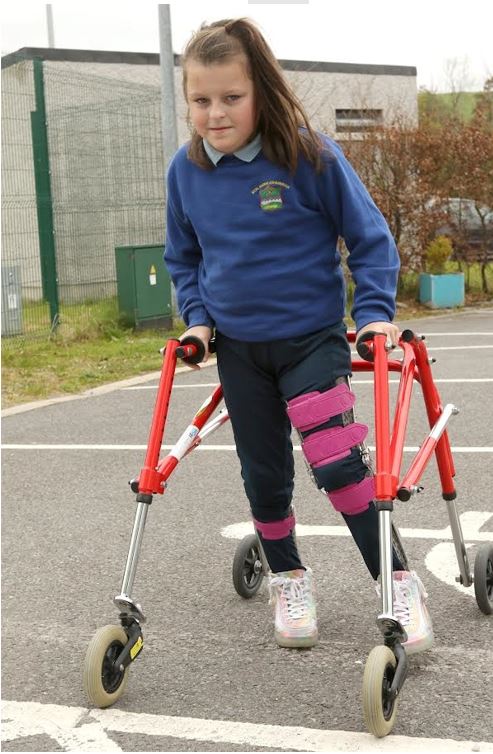 The family was waiting on a particular brace for her leg and when it arrived last week it meant a new chapter in Caoimhe's life. She was full-time in a wheelchair up to this.

"She still has a big journey ahead of her but she has come a long way in a short space of time. Last Friday was her first day walking into school. It was very emotional for everyone, it was a day we never thought we would see."

Noreen added a large part of the success was Caomihe's very determined approach to life.

"She's a very active child and although aware of what she can and can't do, she's always pushing herself to achieve her maximum potential, a 100% can-do attitude. She pushes herself a little more every day. She still uses her wheelchair but we are hoping in time she'll use less of the chair and walk more. Friday was just the start for her."

She is also very aware that they had to seek out guidance and support to get to this stage.

"Apart from the help from Physio Éireann, we had to go abroad for help. After we were told she would never walk we explored all avenues and never gave up. Now eight months of therapy has brought her to a new place."

Noreen said Caoimhe was a very sociable young girl who has friends, takes part in activities with the local Naomh Brid GAA Club, and has her favourite bands, a normal 10-year-old.

"She swims every week too, enjoys YouTube, Tik-Tok, and does everything she possibly can."

There is no doubt Noreen and her husband Stuart who own FDR Car Sales and Services, Ballintra feels Caoimhe's example will be an inspiration for others dealing with similar situations.

"I would highly recommend Swim Lab International and it's an awful pity that services like this don't exist in Ireland because it's a real positive place and all about proving that with therapy children will achieve results. There's no miracle here. Caoimhe has proven that with prolonged and consistent therapy children will defy all the odds."

Going from a full-time wheelchair user to using crutches to get around in only eight months doesn't come without work and dedication either, says Noreen.

"She does work tirelessly behind the scenes. Where other kids are getting up in the morning to watch TV, she is doing physio exercises and when they are watching TV in the evening, she is going to the swimming pool. She could be swimming four or five times a week and physio for the same length of time.

"When we started seeing results it was very hard to hold back and when she saw this, she wanted to do more. When you are confined to a wheelchair for ten years and you realise your legs can actually work you are motivated. Friday last was only the start. There is so much more left to come and we have so many plans for her to help them reach her full potential.

"We are hoping within time the walker will be gone and she will be using a stick or maybe two, we don't know but the future is definitely bright."

She adds writing children off too early is wrong.

"Taking the time and putting in the effort from a therapy point of view works. Someone said to me it was a miracle. I said it wasn't, it was getting the right advice and support."