Tánaiste hopes mica issues to legislated for in June or July

Leo Varadkar hints at further investment for Donegal too 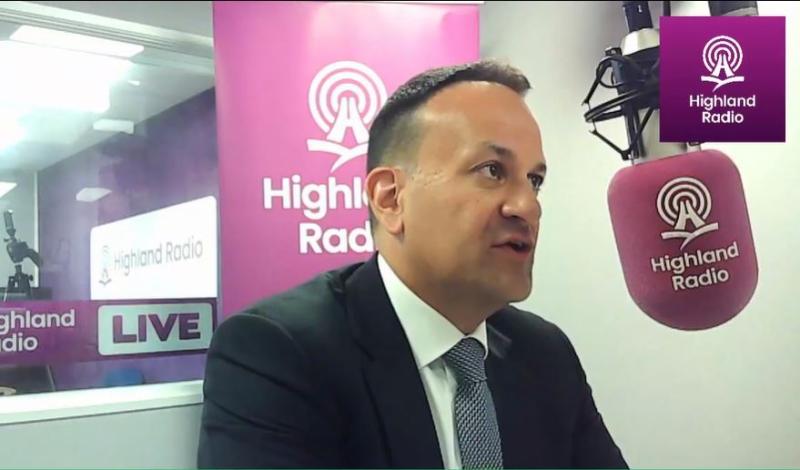 Tánaiste and Minister for Enterprise, Trade and Employment, Leo Varadkar speaking on Highland Radio this morning

Tánaiste and Minister for Enterprise, Trade and Employment, Leo Varadkar covered a wide range of topics when he spoke on Highland Radio this morning.

He dealt with the departure of Deputy Joe McHugh, the mica crisis, job opportunities and the election in Northern Ireland.

This was part of a very busy schedule today for Mr Varadkar. It included a visit to TATA Consultancy Services in Letterkenny and a meeting with the Mica Action Group at a damaged house in Magheraboy, just outside the town.

Later this afternoon he is due to go to the Milford Resource Centre where he will meet the community group and Ukrainian refugees before returning to Letterkenny this afternoon to visit the County Museum on the High Road to see the Treaty exhibition.

This evening he will meet with Fine Gael county councillors in the Radisson Blu Hotel to discuss among other things a replacement candidate for Joe McHugh TD. He will later preside over the Fine Gael Donegal constituency annual general meeting at the same venue.

Speaking on the radio this morning Mr Varadkar outlined how he had discussions with Deputy Joe McHugh about his decision to resign at the next general election and how they had decided to announce the decision early in the week before coming to the county.

"I felt it would be strange if I came here and spent the day in Donegal, which I was going to do anyway and suddenly announced it a week or two after. We thought it would be a good opportunity to make the announcement and then talk to the members tonight about plans for the future."

He paid tribute to the deputy recalling how they both got elected in 2007 gaining seats for the party in areas where they didn't have a seat at the time.

He added they both served on the front bench together and how he had the honour of appointing him as Chief Whip and Minister for Education. he also talked about their work in growing the economy, Brexit, mica and reforming education. His early decision to retire was in a way helpful as it gave them two years for succession planning.

"Joe has given Donegal and Fine Gael enormous service and I'm really sorry to see him go."

He joked the party did have a 'change of mind' form available if he wanted to do that too!

He added they had councillors and maybe even people from outside the traditional family who may be interested in running.

He stressed that ultimately the members in Donegal would decide who would replace Deputy McHugh and a lot would depend on the layout of the constituency after a boundary review.

When asked if there would be a push to have more female candidates, Mr Varadkar said the party hoped they would make up 40% of its candidates in the next election.

The Fine Gael leader revealed that he had visited the TATA Consultancy Services firm earlier this morning. He said things were going really well there and the firm had 170 jobs open for people who  wished to apply for them.

He would not disclose the location for it as it was "commercially confidential" but did say they had three IDA sites in Letterkenny, one in Donegal and one in Ballyshannon.

"We are interested in getting investment into all of them. It is great to see so many job opportunities available. That wasn't the case in the past and I'm working on that to make that better.

He added he was anxiously waiting on the census results saying in 2016 Donegal was one of only two counties where the population went down.

"I think we are going to see a big turnaround in that. We have seen a lot of economic progress in the county and that didn't happen by accident."

Mr Varadkar said he was going to see the Mica Action Group representative later in the day and recalled a visit many years ago with Deputy McHugh to a house in Buncrana.

"I'll never forget the visit. Seeing a house crumbling is an experience."

He acknowledged that the redress scheme was "too long coming" saying there were lots of reasons for that. He also admitted it was going to cost billions of euros to fix.

"It is also going to affect many more parts of the country outside Donegal. The fundamental principle here is that the Government and society can't allow people's homes to crumble around them; can't allow people to become homeless as a result and that's why we are going to intervene. It shouldn't be about which county you are in or which mineral is the cause of the defect, the fundamental principle is that where insurance companies won't, the Government will intervene to ensure peoples' homes can be repaired or rebuilt."

He added he hoped the legislation should be in place to deal with it by June or July, the redress scheme up and running later this year and expected to see significant building works under way, notwithstanding all the problems that arise around labour, materials and all the rest of it.

"I do think this will be going on for a long time, many, many years. It is important we start with those homes most in need and those that are dangerous at the moment," he said.

When asked if it would be a full 100% redress, Mr Varadkar replied 100% or something very close to it.

"I don't want to say nobody will ever have to contribute a euro  because that may not be the case but certainly 100% is what the Government has committed to."

The Fine Gael leader also talked about the economy, the costs of living and the increasing energy costs.

He admitted the handling of the turf cutting saga could have been better. He stressed nothing had been decided.

In relation to today's election count in Northern Ireland, the Fine Gael leader said he hoped an Executive could be formed there within weeks or months and not years.

"We have seen too many breaches and breaks in the continuity of the Executive in the past. Votes are only being counted so we will need to see what happens. I think Sinn Féin will emerge as the largest party but not because their vote will be up, it might actually be down. The reason why they'll emerge as the largest party is the unionist vote is fractured among the three parties.

"We may see the combined nationalist vote going down, the combined unionist vote going down and the middle ground made up of Alliance and the Greens actually be the ones that are growing. That is interesting. That is a change in the politics of Northern Ireland that many of us, including me, have hoped to see for a very long time - people actually going away from the sectarian parties and supporting parties that are cross-community. That I think raises an opportunity," he added.