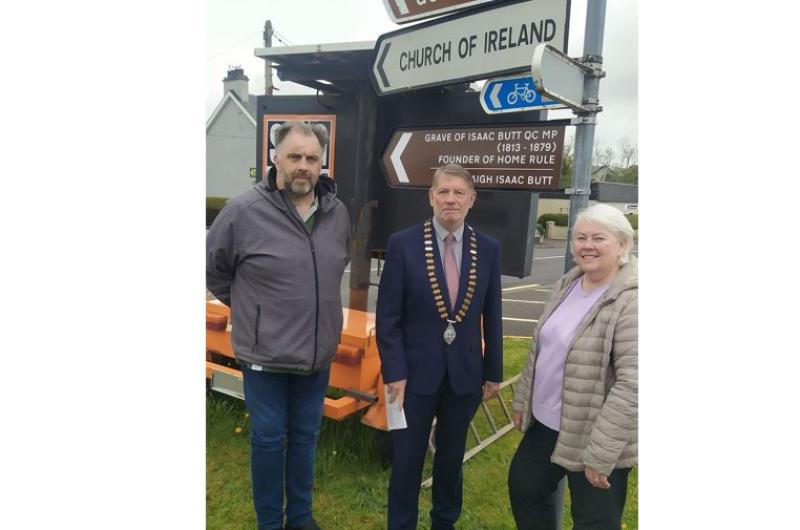 One of Stranorlar's most enduring figures, Isaac Butt has made his mark again - but this time his name has been added to a sign that points you to his final resting place.

The name Butt has become synonymous with many places in the Twin Towns and his celebrated historical status is one members of the Ballybofey, Stranorlar, and District Historical Society (BSADHS) are keen to preserve.

But who was Butt?

Isaac Butt (1813–79) was born on September 6, in the Rectory at Glenfin the only son of Robert Butt (d. 1829), a Church of Ireland parson, and his second wife, Berkeley (née Cox), daughter of the Rev. R. Cox, of Dovishand a descendant of Bishop George Berkeley, after whom she was named. There were six sisters, four of them from his father's first marriage. His father was the rector of the Anglican Parish of Stranorlar. He was educated at Trinity College Dublin and trained as a barrister.

A brilliant debater, he started his career as a Tory politician for Dublin Corporation. He was known for his opposition to the nationalist leader Daniel O'Connell's campaign for the repeal of the Act of Union.

In his early years, Butt was a staunch unionist and Orangeman. He firmly believed that Ireland should be ruled by Westminster. All this changed when Butt witnessed the tragedy of the Great Famine (1845-1849) first hand. He saw how it could have been avoided if Ireland had its own government, and how inept Westminster was in dealing with the problem.

Home Rule
As Butt's opinions changed, he gradually became involved in Irish nationalist politics.
After the 1848 Rising, Butt defended William Smith O'Brien in court.
He also defended Fenian prisoners, such as Charles Kickham, between 1865 and 1869. As a result of this exposure, he became an advocate of Home Rule for Ireland. 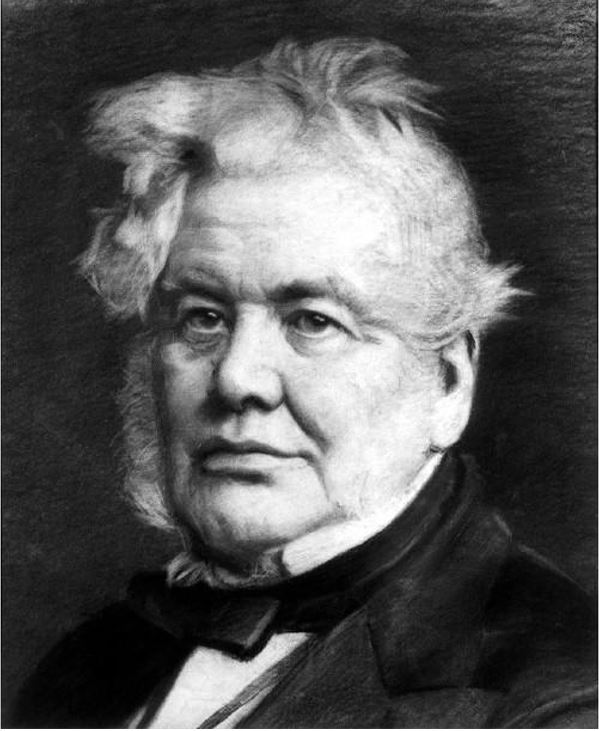 In 1870, Butt founded the Home Government Association, which was renamed the Home Rule League in 1873. In 1871, he stood for election as a Home Rule candidate and was returned as MP for Limerick. At first, the Home Rule Party failed to make an impact in Parliament.

Butt believed in peaceful persuasion, but many of his colleagues believed in 'obstructionism'. This involved disrupting the business of Parliament by using delaying tactics or talking for long periods during debates.

Declining Leadership
Although the Home Rule League gained membership and support in Ireland, Butt began to be seen as an ineffective leader. He was often absent from Westminster, as he had to work as a barrister to pay off his many debts. His polite approach in Parliament was also seen as a sign of weakness by those in the Home Rule Party who wished to obstruct Parliamentary business.

Butt did not approve of obstructionism and firmly believed in gaining support through diplomatic means. This distanced him further from his party and in 1879 he was replaced by William Shaw as leader of the Home Rule League. Shaw was replaced by the charismatic and popular Charles Stewart Parnell in 1880, and the party became more organised.

The Home Rule Movement was a very important part of the progress towards Irish independence, which was eventually secured in 1921. Butt has been called the 'Father of Home Rule'. His influence and passion were important in kick-starting the movement and setting in train a series of historical events.

Butt retired from public life and died in May 1879 in Clonskeagh in Dublin. His remains were brought by train to Stranorlor where he is buried in a corner of the St Mary's Church of Ireland cemetery beneath a tree in which he used to sit and dream as a boy.

New Sign
On Monday last May 2, members of the local society gathered to install a new sign at the junction of the Lifford Road and The Glebe directing people to Butt's grave.

The occasion was also an opportunity to celebrate the elevation of one of its members, Reverend Raymond Blair, to the presidency of the Donegal Historical Society.

In his first engagement wearing the chain of office, he was on hand to thank the former chairperson of the society, Kathleen Phelan who took the signage project from inception to installation, and the members who attended.

The BSADHS meets on the fourth Monday of every month from September to May and this month's meeting in the Henderson's Hall, opposite the Church of Ireland on May 23 is the annual general meeting. New members are welcome to attend.

The society covers a wide range of subjects of historical interest.
Recently they have begun advocating for proper public access to Dunwiley Fort and have met on site with representatives of the National Roads Authority as the proposed bypass runs close to the historic site.