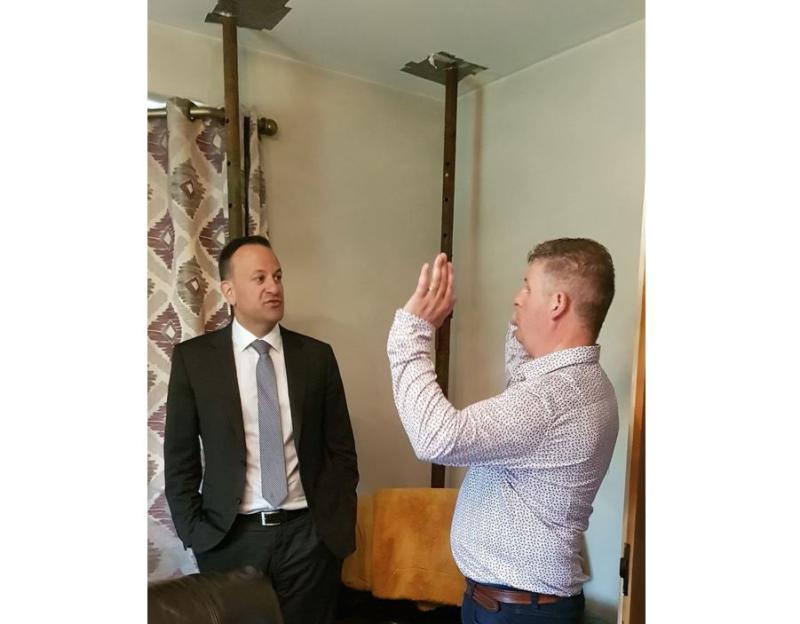 The reality of living in a mica-affected home was placed front and centre for tánaiste Leo Varadkar when he visited the home of Peter and Michelle Patton, Magheraboy, Letterkenny yesterday afternoon.

He saw how they had to erect acro props to support the concrete slab living room ceiling for fear of collapse.

The couple graciously opened the doors of their mica impacted home to him, along with a delegation of campaigners and a number of local representatives.

According to the Mica Action Group, the homeowners told a forthright and at times heart-rending account of how their lives had been devastated since realising their home was affected by mica.

After talking to a building professional, Peter Patton described how he had taken the decision to install acro props to support the concrete slab living room ceiling to try and ensure his family was safe.

The homeowners also emphasised how not having a workable scheme is unnecessarily prolonging the anxiety and frustration felt by affected families.

Mr Varadkar has already acknowledged that the redress scheme was "too long coming" saying there were lots of reasons for that. He also admitted it was going to cost billions of euros to fix.

"It is also going to affect many more parts of the country outside Donegal. The fundamental principle here is that the Government and society can't allow people's homes to crumble around them; can't allow people to become homeless as a result and that's why we're are going to intervene. It shouldn't be about which county you are in or which mineral is the cause of the defect, the fundamental principle is that where insurance companies won't, the Government will intervene to ensure peoples' homes can be repaired or rebuilt."

He added he hoped the legislation should be in place to deal with it by June or July, the redress scheme up and running later this year, and expected to see significant building works under way, notwithstanding all the problems that arise around labour, materials and all the rest of it.

"I do think this will be going on for a long time, many, many years. It is important we start with those homes most in need and those that are dangerous at the moment," he said.

When asked if it would be a full 100% redress, Mr Varadkar replied 100% or something very close to it.

"I don't want to say nobody will ever have to contribute a euro because that may not be the case but certainly 100% is what the Government has committed to."