Film will be showing locally from Thursday 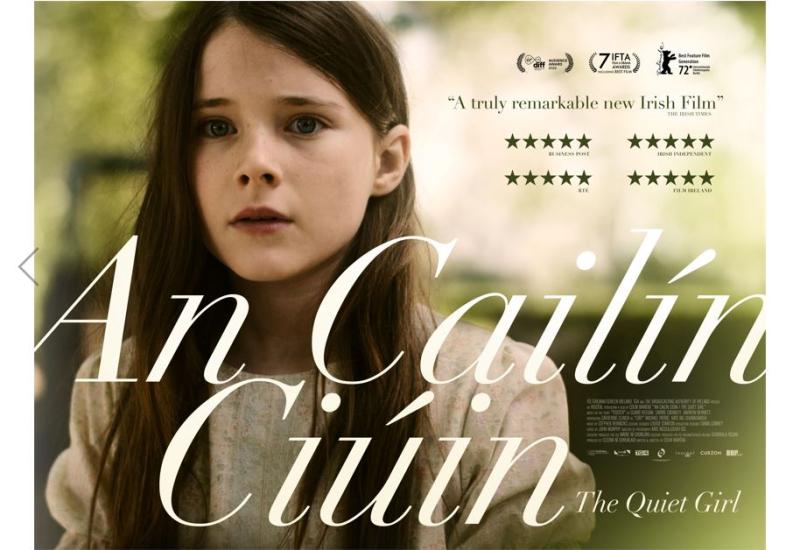 The critically acclaimed film, An Cailín Ciúin (The Quiet Girl) will be screening in Lettterkenny from Thursday.

There are a number of connections between the film and Donegal too - with producer, Cleona Ní Chrualaoi’s mother, Ellen Crowley (née Doherty) hailing from Gaeltacht Ros Goill near Downings.

Cleona’s uncle, Michael Doherty, and his family own and run the well-known pub, The Singing Pub (An Síbín Ceoil) on the Atlantic Drive near Downings.

Cleona spent many holidays in Donegal over the years and is still a regular visitor to the area. The mother of actor, Carrie Crowley was originally from The Rosses.

Nodlaig Sharkey’s mother, Bridget O’Donnell, was a teacher from Meenbanad. Carrie also spent many summers in Donegal and still goes there every year to visit relatives and friends on Cruit Island and Glencolmcille. Carrie, who plays the role of Eibhlín, one of the lead roles in the film, is from Waterford.

The Irish-language feature film had its world premiere at the prestigious Berlinale in February where it scooped The Grand Prix of the Generation Kplus International Jury for Best Film.

An Cailín Ciúin tells the story of Cáit (Catherine Clinch) - a nine-year-old girl from an overcrowded, dysfunctional family who is sent away to live with her mother’s relatives for the summer.

She is welcomed with open arms by Eibhlín (Carrie Crowley), but her husband (Andrew Bennett) keeps Cáit at arm's length. Slowly, but surely a warmth grows within this makeshift family, and Cáit blossoms in their care. But in this house where there are meant to be no secrets, she discovers one painful truth.

Based on the acclaimed story, Foster by Claire Keegan, An Cailín Ciúin is a complex and delicate coming-of-age drama that explores questions of family, neglect and loss through the eyes of its young protagonist.

It is also the feature film debut of writer/director, Colm Bairéad and producer, Cleona Ní Chrualaoi of Inscéal.

The film was funded by Screen Ireland, TG4 and the Broadcasting Authority of Ireland as part of the Cine4 scheme. It will be screened at Century Cinemas, Letterkenny from May 12.