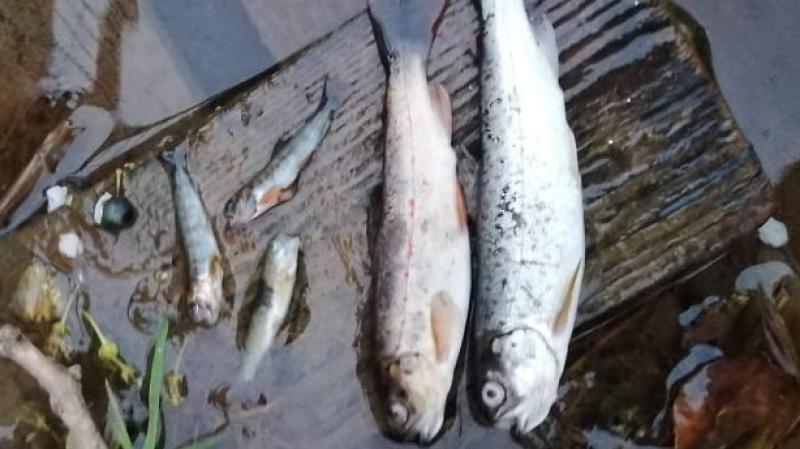 A substantial South Inishowen fish kill, believed to be linked to recurring incidents of pollution, has been reported to Donegal County Council and Inland Fisheries Ireland. It was also raised at Tuesday's ongoing May meeting of Inishowen Municipal District councillors.

The issue was highlighted to Councillor Terry Crossan (Sinn Féin) by a concerned member of the community.

Speaking to Inish Times, Cllr Crossan said the incident occurred at the stream which runs past St Aengus' National School in Bridgend.

“That stream is a tributary of the Skeoge River, which in turn runs into Inch Lake,” said Cllr Crossan.

“In the photograph of the dead fish taken by the person who contacted me, there is a brown trout and a number of salmon parr. That constitutes a serious, serious situation.

“It could be effluent from the sewage system of nearby housing estates or some kind of drain off from agricultural land. I am not sure.

“I have contacted the Chief Environmental Officer and Chief Scientific Officer of Donegal County Council and asked them to come out and take samples from the stream. The trout could be gone, washed away, because of a rise in the water on Monday following the heavy rain. The person who got in touch with me about the incident also collected and preserved a number of the dead fish, which will be tested to try and determine the nature of the pollution. I have also alerted Inland Fisheries Ireland to the fish kill because it has a remit to investigate outbreaks of possible water contamination, which have a detrimental effect on the insect and fish life of a stream,” said Cllr Crossan.

The substantial fish kill was first noticed by a local man who was out walking his dogs.

He said he had noticed the water in the stream “ very murky and very white” a couple of evenings before the incident.

He added: “This is the fourth time it has happened in the last two years.

“Two nights later, I was coming back down again. I always check the streams because I am a fisherman, and I like to keep an eye on the environment.

“If I notice anything untoward, I try to highlight it, but, sometimes, trying to contact Donegal County Council is impossible. I tried phoning the Environmental Protection Agency but the phone number was not being recognised.

“That is when I saw at least 60 fish, dead, lying along the sides of the stream. I noticed over this last couple of years they were big trout but they are now getting smaller and smaller. They are just getting wiped out. There were minnows and everything there two days ago and they are all dead as well,” he said.

“If you take the minnows out of the streams, the fish that are going out to sea for four years and coming back, the sea trout, they are not getting a chance. They age getting wiped out every couple of months. If it is not slurry, if it is not sewers, it is always something, run off from the land. I actually witnessed tractors and slurry tanks washing out up there in the stream. It is just unbelievable,” he said.

The man added that fishermen were getting blamed for over fishing when it was not their fault, it was pollution.

He added: “The rod fishermen are not responsible for the fish kills, it is pollution and what is being done to the stream.

“That is a feeder stream for the minnows and if they are wiped out, there are no fish coming up.