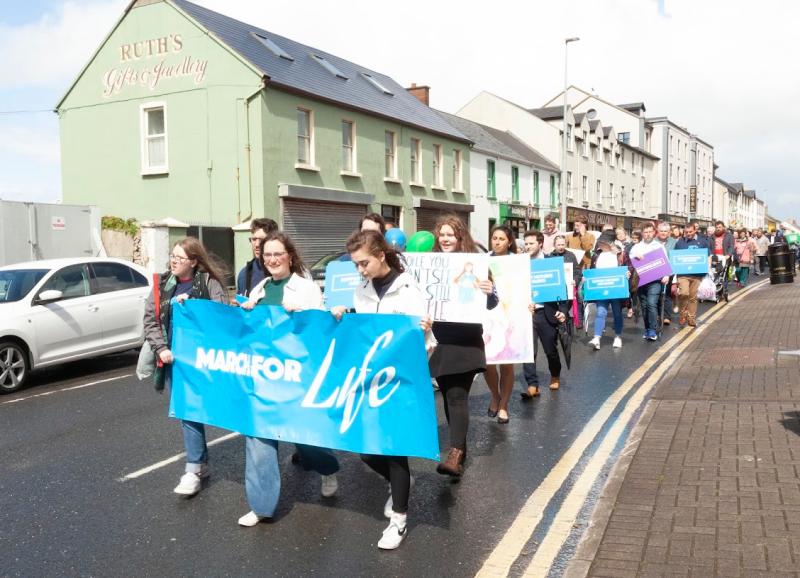 We owe it to mothers and their unborn babies to make sure that abortion is never normalised in our society because it involves the ending of an innocent defenceless human life. That was just one of the many messages delivered to the hundreds that attended the Pro Life campaign’s March for Life in Bundoran on Sunday afternoon.

The group held the march to raise awareness about what it called “Ireland’s spiralling abortion rate” and to press for proper resources to be put in place to support and inform women about positive alternatives to abortion.

Concerns were also raised about the pressures being placed on doctors and nurses to assist in abortions, forcing them to act against their conscience and opposition to abortion. Ms Sweeney claimed the word abortion is today phrased as “healthcare” in an attempt to “ normalise” the killing of that baby, forcing it to appear fashionable and modern.

“Abortion is not a routine medical procedure,” she said.

“This attempted sterilisation of the language is also intended to be introduced to our media and schools. Parents and teachers must be vigilant and conscious of suggested changes to the syllabus in schools, look at RSE, the thematic contents of the novels being introduced to the Junior Cert and Leaving Cert syllabus.

“We, who respect life from conception, owe it to our youth and to our children to get into the schools to counterbalance the pro-abortion narrative explaining the full implications of abortion and the lasting implications of an abortion for both the mother and the unborn baby and increasingly we in Donegal Pro-life are aware of the impact on fathers as well.

“And yes, being out on the street like today has a place in all of this. We owe it to mothers and their unborn babies to make sure that abortion is never normalised in our society because it involves the ending of an innocent defenceless human life.”

Donegal Pro Life chairperson Ms McGeehan added she appreciated there is a lot of work going on throughout the country and they need to always be prepared to go out on the streets and stand together like they were doing that day.

“Alas, it is sad that there is a big increase in the number of abortions in the country since legislation changed - it is a shame and sad, that supporters of abortion are putting pressure on doctors to help make abortions available,” she said.

“We have to support our doctors, nurses and our workers in the health service who believe in people's dignity and the right to life. We will work together to nurture the culture of life again and to decrease the rate of abortions in the country.”

The event was attended by people from across Donegal, Derry, Sligo, and surrounding counties.