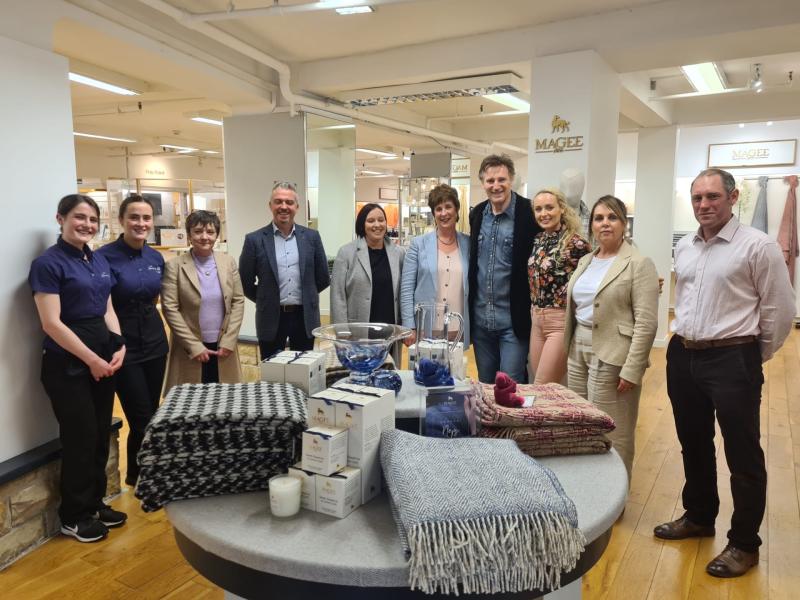 Hollywood superstar and Oscar-nominated actor Liam Neeson received an early birthday present this week when he visited Magee of Donegal .

The star of blockbuster films such as Taken, The Mission, Schindler's List, Michael Collins, Les Misérables, Star Wars: Episode 1 The Phantom Menace, Batman begins, Silence and The Grey is currently in the south-west of the county filming a movie, In the Land of Saints and Sinners with an all-star cast including fellow Northern Irish actor Ciaran Hinds as well as Colm Meaney.

He's popped up in several places during breaks from filming the Netflix movie which is set in a remote Irish village, where a newly retired assassin finds himself drawn into a lethal game of cat and mouse with a trio of vengeful terrorists.

But there was no danger of any of that kind of stuff yesterday (Wednesday) when he pulled into the Donegal Town store.

Magee 1866 is a fifth-generation Irish family business with over 150 years of experience in designing, weaving, and tailoring luxurious fabrics and clothing in Donegal.

Liam met with Magee of Donegal manager Stephen Harron (above) and his team in the store, as well as Patrick Temple, chief executive of Magee Weaving and part of the fifth generation at the helm of the Magee 1866 family business.

To mark his stay in the locality, Liam was gifted a Magee 1866 Made to Measure jacket, crafted in Donegal Tweed designed and woven at the local Magee mill.

Not only is Liam a talented actor, but he's also got good taste in jackets too. By the way, he marks his on Tuesday week, June 7. If you see him about don't forget to wish him a happy 70th birthday ...and if he's wearing that jacket remind him he's got impeccable taste and tell him to wear it at the next Oscars ceremony!