A trip to the Croaghs deep into the heart of Donegal

Music, song, dance, and a look back at the traditional way of life

The Croaghs, an area nestled among the mountains of the Bluestacks, is a unique place.

When the great ice sheets and glaciers disappeared northwards at the end of the last Ice Age it left a unique imprint on the Donegal landscape, it left us the Croaghs.

This area is found as we call it ‘on the back road to Glenties’ and has seen famine, emigration, poverty and so much more.

Having relatively little contact with the outside world for years the opportunity to visit should not be missed. That opportunity came last weekend thanks to the bus trip organised as part of the annual Ceol na gCruach festival.

After leaving the hospitality enjoyed at base camp, The Glen Tavern (Dinny’s), Greenans in the Glen of Glenties, the bus made its way past the famous fiddling Campbell's homestead - as names like Vincent, Jimmy, Columba, Eugene, and Peter their father were talked about in reverential tones.

Next, the bus stopped at Tangaveane where the aptly named Echoes in the Glen performance took place. This is a tradition of exchanging music on both sides of the glen while travelling at night time. They say it was company, perhaps safety as well as a guide for all who heard it, a sort of Sat Nav in bygone days.

Fiddlers Iarlaith O'Donnell and Ronan Galvin played from Silver Hill while Denise Boyle, Caoimhin Moorhead, Rosemary Phelan, and others responded from the R253.

A few miles further down the road and the majesty of the Blue Stacks or Na Cruacha Gorma became even more striking. We left a narrow road to navigate an even narrower track that twisted and wound its way over the Reelan River offering views of Lavagh More, Lavagh Beg, Croaghgorm, Croaghbane, Ardnageer, Croaghnamuck, and Cullaghacro along the way.

At one time this relatively empty landscape was home to approximately 300-400 people. Their modest dwellings now jut out of the ground like skeletal remains in an old graveyard. These stone structures (or what’s left of them) stand in an idyllic and beautiful setting but they are also loaded with emotion, a haunting reminder of times past.
You could spend hours meandering from cottage to neighbouring cottage, along the ancient tracks and through adjacent fields with their lazy bed ridges and furrows in a journey back in time, well hidden from the 21st century.

It is said many came to this place from Tyrone following the Plantation of Ulster. Names like McLoone, Gallagher, Gibbons, McHugh, McGinley, and Doherty were common here for many years. The story of these mountains and their inhabitants in this once-thriving Irish-speaking community is disappearing with only the folklore, music, and songs giving it a unique identity that survives. Only the trees, nettles, bushes, and briars grow here now.

Just like the community ran out of time, we ran out of road too but not before there was a ceili at a crossroads. The music from here has been preserved by the Campbells, mainly because of the influence of their grandmother, one of the Gallaghers' and of course by the renowned John Simí Doherty.

Dancing at the crossroads when the road ran out

Frank and Eileen Sweeney from Gortahork got proceedings underway with several Highlands and Sean Nós dances while Joe McGuigan enthralled onlookers with the famous Maggie Pickens (Pickie). This is a dance that used to be performed in one home in this part of the world on a half door placed on a kitchen floor.

On this occasion, the dancers used a perfect square slab of wood to great effect. To add an international dimension to the proceedings Perrine Bourel and Robin Vargoz from the French Alps also performed showing off their local playing and their French folk dance called the Rigodon. They were joined by the aforementioned players and Australian native, David Bell.

As conversations developed it was great to hear locals with the living experiences of the Croaghs talk about their memories of the place.
People like Condy Campbell, Connie Molloy, and Josie Campbell were recalling tales of their younger days and how the small shop, a dance hall, the school, and the population came and went. By the 1980s almost everyone had left and even today only one family resettled from England calls this place home.

The last stop on the tour was Edeninfagh graveyard. We all got out for a prayer, a recollection or to exchange a memory about the late Jimmy Campbell who passed away in January of this year. Jimmy was well-known, not only for his fiddle music, but also for his warm wit and company, and will always be sorely missed.

Back at the Glen Tavern, we were all treated to a wonderful Irish Stew or vegetarian lasagne, depending on your taste, and a wee drop of whatever tickled your fancy. A mighty day out.

The hills and indeed the whole of the Glen of Glenties were alive with the sound of music last weekend for the annual Ceol na gCruach gathering.

It is an event like no other; a celebration of the music, the traditions, the culture, and the people from the Bluestack mountains. This three-day fling involved a variety of attractions with Irish traditional music, particularly fiddle playing at its core.

Organised by Annie Quinn with back up from her sister Mary and assorted friends, the Cairdeas na bhFidiléirí organisation, and the Arts Council, it's a beacon for doing things the simple way - it happens, and it works.

The programme began in Edeninfagh Hall on Friday night with the screening of a special film in honour of the highly respected fiddle- playing family, The Campbells. This was followed by a session in nearby The Glen Tavern at Greenan with contributions from fiddlers, Perrine Bourel and Robin Vargoz from the French Alps, Peter Campbell, Tara Conaghan, Denise Boyle Ronan Galvin, Martin McGinley, Jim, and Fiona Byrne, Paddy McMenamin, Michelle McGeehan, Paddy Toye, Fiona Gavin, Noel Burke Iarlaith O'Donnell, and Chris Cornwall to name a few.

Saturday included fiddle lessons, dance classes, the bus tour of the Croaghs, and another session including a barn dance that night. 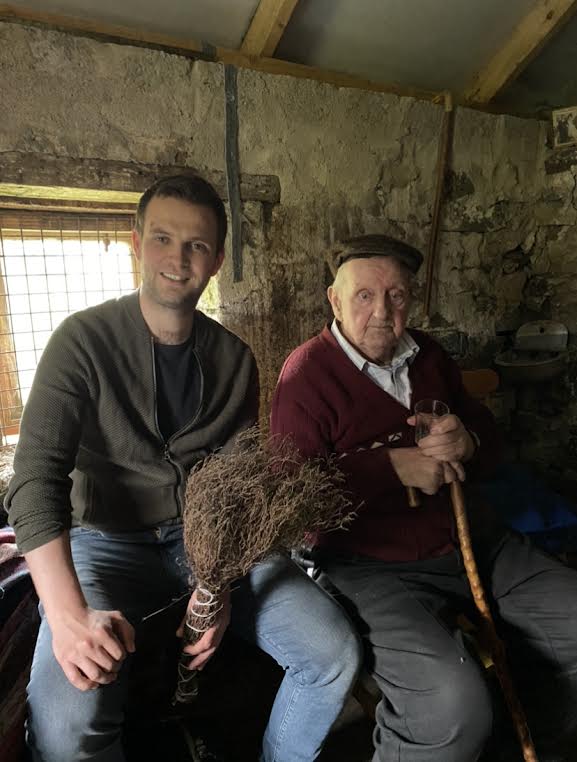 On Sunday there was a special treat with tunes and stories from Condy Campbell's hut. His memory and storytelling skills provided listeners with a picture from days long gone by. Visitors came from far and near: Japan, Canada, Australia, America, German, Switzerland, Hungary, Spain, and Scotland as well as all parts of Ireland.

The music of the Bluestack mountains, like most parts of Ireland, is really dance music and although instrumental music has sustained through regular sessions in comparison to dance, the highlands, barn dances, mazurkas, waltzes, and other local dances are still the foundation of the local tradition. This Ceol na gCruach weekend preserves and strengthens this.

Roll on next year.