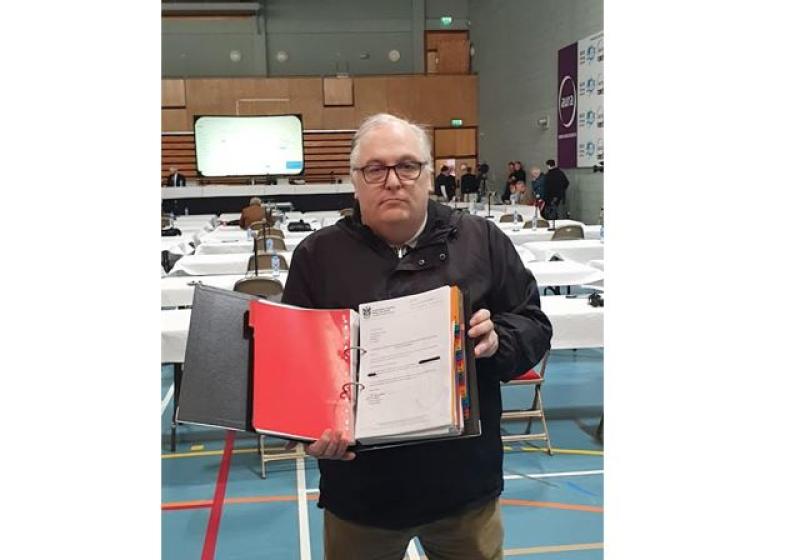 Independent Raphoe councillor Frank McBrearty Jnr is about to take a major step in his ongoing battle to get justice for so-called mica homeowners in Donegal and beyond who have suffered the indignation of watching their homes crumble around them due to no fault of their own.

However, he first has to persuade the leaders of the three-party Government coalition and the Oireachtas Select Committee on Housing, Local Government and Heritage to halt the path of the enhanced Defective Concrete Blocks Grant Scheme to the cabinet for a decision.

It has been estimated the work currently called for under the bill would be in the region of approximately €2.2 billion to implement.

Cllr McBrearty Jnr claims what will be in this bill and its recommended solutions are not based on science and are morally unethical not to recommend the correct engineering solution.

The controversial councillor has amassed a massive file with hundreds of pages and tens of thousands of words that cover this saga starting as far as 2009 through to this week.

He says his research has been painstakingly detailed and methodical covering events surrounding the purchase of the five houses at An Crannla in Buncrana.

He believes this transaction has brought matters to a head and needs to be investigated independently. He also called for all housing acquisitions made by Donegal County Council (DCC) since the financial crash that happened in 2008 must also be investigated due to the possibility that there is a high percentage of them being affected by deleterious materials and iron sulphide minerals.

He claims the information contained in it was gathered from a variety of avenues including Freedom of Information requests coupled with his own investigations and sources.

He details in chronological order the sequence of events and decisions that led to the acquisition of what he calls the affected defective concrete block properties.

"I have proved without a doubt that the predominant problems in the Donegal affected homes and properties is iron sulphide minerals and not just mica. The facts contained in this file and documentation do not lie," he says.

He points to the passing of two motions at the Lifford-Stranorlar Municipal District and at last Monday's meeting of Donegal County Council, May 30 as the key to opening the doors for him to take his fight for homeowners to the next level.

Cllr McBrearty Jnr's first motion on May 19 called on the Government to reject the enhanced Defective Concrete Blocks Grant Scheme if the ten items he listed related to the whole area of deleterious
materials and iron sulphide minerals and their effects on concrete blocks were not included.

The second motion, which was passed at Monday's full Donegal County Council meeting in Letterkenny, called on it to hand over the information that he claims proves iron sulphide minerals are the predominant problem showing up in 723 applications sitting in the council's SI 25, 90/10 Defective Concrete Blocks Grant Scheme which is currently suspended.

"After my two motions were unanimously passed at municipal district and full council levels it shows that the elected members may finally be starting to accept what he has been raised is the real problems facing homeowners.

"If the Government doesn't take on board the scientific evidence published worldwide on the whole subject of iron sulphide minerals, then homeowners will face Groundhog Day all over again when the
the enhanced scheme is signed into law.

"There is no study or peer literature on mica and the information that has been put into the public domain to date has, in my opinion, been inaccurate due to the fact there are no scientific-led base
studies on this subject matter."

The Raphoe man admitted that like many others, in the beginning, he too was in denial when he first heard of the so-called mica problem due to no cracks showing up at that time and that it was a
the predominant problem in Inishowen only.

Today his home is visually now showing the same problems as many others are across the county.

"When the Mica Action Group made a presentation to the council in May 2014, I did not know what to think. I knew I was possibly facing similar difficulties after hearing about where they thought the problem was coming from but like other affected homeowners, I was in denial.

"The advice I gave to affected homeowners at the time was to go the legal route and that is still my position today. If Government doesn’t accept full liability, my position won’t change on that advice.

"What brought it to a head for me was when my mother decided she wanted to paint her house in 2021 especially when cracks started appearing on the walls and we knew there was a problem.

"I got an engineer to test my parent's house in May and it showed they had a problem and my cousin's husband did the same thing. I am currently waiting for our coring contractor to come to my own home for testing and I am 100% sure I have it too due to where the blocks were sourced."

He said he then began researching the subject in earnest after that because of more reports of problems from family members, relatives, friends and constituents in his own electoral area.

"All of them have been devastated and destroyed by this disaster."

He adds he feels he has been frustrated by officialdom and the more he gathered information the more he became convinced he had to take action before it's too late.

Cllr McBrearty Jnr has been suspended from the council, reported to the Standards in Public Office Commission several times, been investigated by the gardaí for an alleged assault, taken to the High Court by the council itself, fined a month's salary while suspended and fined 10% of his salary for 12 months.

"You can't expect to step into the ring and not get hit. I am prepared to take it on the chin and put up with all the negativity thrown at me to prove my case as long as people get proper justice for what has happened to them.

"We must move on to the question of establishing a full independent judicial public inquiry sooner, rather than later so we can find out once and for all how we got into this mess in the first
place."

He is now ready for the next stage, taking his evidence to the Taoiseach, Tánaiste, the minister for housing and the Oireachtas Select Committee on Housing, Local Government and Heritage.

"It is encouraging that the tánaiste's office has been in touch two days in a row this week and I have been in correspondence with the cathaoirleach of the Joint Committee on Housing, Local Government and Heritage, Steven Matthews TD in relation to addressing that committee as they will ultimately deal with the bill before it is passed into law.

"I am encouraged by the fact they have acknowledged my representations on the information I have supplied to them to date and the committee chairman advised me of the procedure and who to
contact."

This will not be the first time Cllr McBrearty Jnr has addressed powerful committees. In 2005 he led a family delegation to the European Parliament in Brussels where he addressed Irish MEPs and gave them a presentation which was then passed to the Petitions Committee in the Parliament.

When he was Mayor of Donegal, he led a delegation in 2013 to the Oireachtas Transport Committee and was assisted by elected members and officials from border counties who are affected by the slow
progress of the A5 infrastructure project.

"After 13 years in politics, I think I am well qualified to address and make a presentation to a Dáil committee. I believe I have a democratic mandate on behalf of the electorate who voted for me and all the defective concrete block home families who contact me on a daily basis which should entitle me to address this important committee in the public interest.

"The Governments first priority must be to ensure that the proper engineering solution is created which they must base on science and not on guesswork as it appears to be at the moment. It is essential this happens so that all properties are correctly fixed but sadly, this has been missing from day one.

"Secondly, this must be followed by establishing a proper 100% enhanced compensation scheme and not a grant. Based on what is showing up in test result in Donegal should guarantee affected home owner’s option one, full demolition and rebuild which must be the only recommended solution on the table.

The councillor revealed that he had sent all information to the taoiseach, Micheál Martin, tánaiste Leo Varadkar and the leader of the Green Party, Eamon Ryan as well as the chairman of the Joint Committee on Housing, Local Government and Heritage as well as all five Donegal TDs and all county councillors.

"I have received no response from our Donegal TDs and I'm not surprised by their silence. Only Cllr Michael McBride (Ind) has responded out of the 35 other councillors on Donegal County Council.
"I feel that the unanimous support for my motion at Monday’s full council meeting could be a turning point for all affected homeowners if all councillors demand the Government to stop, listen and take proper advice from the leading experts from around the world before passing the enhanced scheme into law.

"The differences between councillors are nothing new in local politics but those political differences must now be put to one side until we ensure that the bill coming before the Dáil on the enhanced grant scheme includes the peer literature available on iron sulphide, the establishment of a peer review study into mica and the withdrawal of I.S 465 and the creation of a proper defective concrete and concrete block Irish standard based on proper research.

"If this does not happen then no proper solution will be found to deal with all deleterious materials, iron sulphide minerals and its effects on concrete. The talk of Pre-Legislative Scrutiny (PLS) is irrelevant or has no bearing on the bill if all the information supplied by me and others to date is not included in the bill before it is passed into law. The result of that will be a take it or leave it grant scheme?" he says.