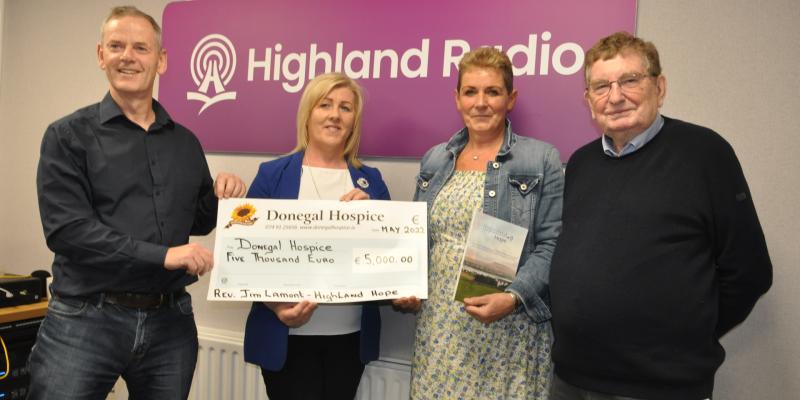 The amount raised by the Rev Jim Lamont’s new book Highland Hope has now reached the €25,000 mark. All the proceeds from the book are going to Donegal Hospice.
A cheque for the latest donation of €5,000 was presented to Isobell Doherty, administrator at the hospice, at a ceremony which took place in the studios of Highland Radio on Thursday last.
Earlier,  Jim and Highland Hope committee member Fiona McNutt from Carrigart had taken part in an interview on John Breslin’s popular Around the North-West programme on Highland.
The funds raised by Highland Hope so far brings to €150,000 the total raised by Mr Lamont’s three books and a number of concerts he organised in aid of the Hospice.
Mr Lamont said: “As a chaplain, I know that the pressures on the hospice are growing all the time so it’s good to be able to assist in this way.
“We are pleased by the support for this book and we have received a lot of favourable feedback. My message through this book is that we should never give up on hope.”

Letterkenny Busking Festival to return to the streets next month

Performers and groups of all ages, sizes and talents are welcome to take part

Fiona McNutt said the committee was grateful to those who had funded the overheads and also to the local bookshops and gift stores that are stocking Highland Hope.
She added: “The book is part of the Highland trilogy, so-called because Jim Lamont is a regular broadcaster on the radio station. Indeed his broadcasting career commenced with his Thought for the Day messages on the John Breslin show in 2000.
“In many ways, these broadcasts were the genesis of the three books, Highland Inspiration, Highland Reflections and now Highland Hope.”
Mr Breslin said: “In Highland Hope, the Rev Jim once again takes the time to talk to us about our everyday concerns and fears, about what makes us tick and about what we aspire to.”
Dr Michael McBrien, co-ordinator of the Highland Hope editorial committee, said: “Readers can dip in and out of this book and we hope they will be variously entertained, amused and encouraged by the content.”
Mr Lamont currently hosts a Sunday service on Highland every other Sunday morning as part of the Aidan Murphy show. He is minister emeritus of Dunfanaghy and Carrigart Presbyterian Churches.
Copies of Highland Hope (€10) are available in leading book shops and gift stores in Co. Donegal and from Faith Mission outlets in Northern Ireland.