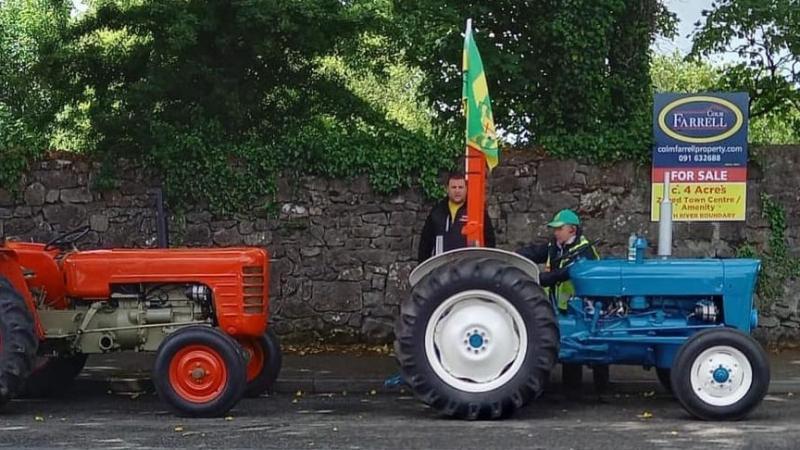 If you see a 1966 Dexter and Zetor tractor travelling in convoy over the weekend, give them a wave and a wee donation for the Irish Motor Neurone Disease Association.

The tractors are being driven by Clonmany men, Paidin Doherty and Bernard Devlin, who are being ably assisted by Shane McLaughlin in the support van.

The two men left Mizen Head in County Cork on Wednesday morning and are hoping to reach Malin Head on Sunday afternoon. You can follow their progress on the Mizen Head to Malin Head Tractor Run for MND Facebook page.

Inish Times / Inish Live caught up with Paidin on Friday afternoon as they were enjoying a pit stop in Gort in County Galway.

Apart from being a bit sore on the backside, Paidin laughed as he said said the trip was going well.

He added: “Bernard and I were going to do a Mizen to Malin tractor run about four years ago but then somebody else did it and we said we would wait till the following year. Then covid struck and we couldn't do anything then. So, earlier this year, we said, 'Right we are going to do it this year, no matter what' and now we are well on our way.”

Paidin, who climbed Binnion Hill, Sliabh Sneacht and Errigal over the Climb With Charlie weekend in April as part of the Civil Defence teams looking after other climbers, said he had decided to do the fundraiser for the Irish Motor Neurone Disease Association because he had a friend who was diagnosed with the condition.

He said: “I know a few people with Motor Neurone Disease. It has really been highlighted since Charlie Bird made his condition public.

“So, we set off from Mizen Head on Thursday morning and so far it is going grand. We are We are aiming for Kilkelly in County Mayo this evening (Friday). Then it is from Kilkelly to Letterkenny on Saturday and from Letterkenny to Malin Head on Sunday. We are hoping to get there between 4pm and 6pm, maybe around 4.30pm.

“The weather has not been to bad. Yesterday morning, at the start it was wet for about two hours. Then it brightened up and was a lovely day. We have missed the showers today.

“We have the Mizen to Malin GoFundMe page so people can donate online and when we hit Donegal, we are going to start a bucket collection. We are getting a good reception on the road, plenty of horns and waving. We got a great reception in Cork on Wednesday evening in the local bar,” said Paidin.

Paidin thanked everyone who had given them sponsorship and the people who sponsored their nightly accommodation, then it was back on the tractor and away.