HMS Enterprise is currently tied up in the heart of Cork city, on Horgan's Quay, where she flies both the Union Jack and the Irish Tricolour as ships visiting foreign ports do out of courtesy to their hosts.

The vessel in Cork may be on a courtesy call but the sudden arrival of the British navy at a time when the row over the Northern Ireland protocol is causing a lot of friction between Ireland and the UK means Cllr Mac Gioilla Easbuig is not amused.

In a hard-hitting statement on Saturday night, the independent councillor questioned the situation and the government's attitude to this at this sensitive time.

"As the current coalition government attempts to destroy what's left of Irelands military neutrality, a British War vessel with armed sailors has docked in Cork.

"No one needs a history lesson regarding the British military in Ireland or the continued partition of our country."

HMS Enterprise is an Echo-class multi-role survey, hydrographic and oceanographic vessel (SVHO) of the Royal Navy and along with surveying and mapping the ocean depths, she has been involved in many humanitarian and emergency missions in recent years, including rescuing more than 2,400 migrants and refugees attempting to cross from war-torn Libya to Italy during the crisis in the north-African country in 2015. 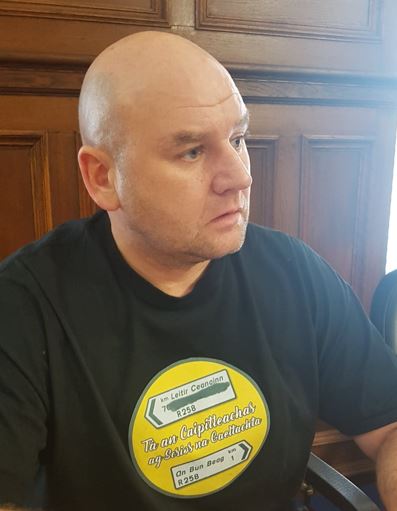 However, Cllr Mac Giolla Easbuig (above) is not impressed with any vessel belonging to Queen Elizabeth II in Irish waters, let alone docked here.

He added: "The current coalition government seem determined to sleepwalk the Irish people into the position of belligerents in the continued wars of western imperialism, we only have to look at Ireland at present to see how imperialism has decimated the potential of the Irish people, its incumbent on us all to resist the use of Ireland as a garrison for foreign armies waging war on countries which we have no dispute with we shouldn't sully the good name of the Irish people by being complicit in another nation's conflict."