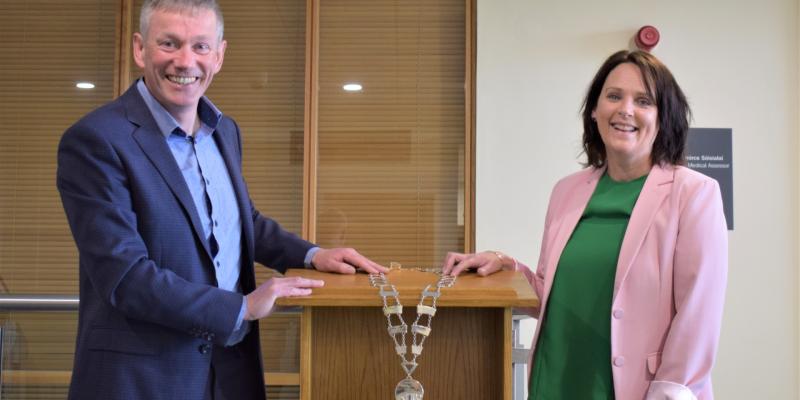 Cllr Barry Sweeny’s time as Cathaoirleach of the Municipal District (MD) of Donegal saw the region transition from living with Covid restrictions to a full return to activities.

Speaking at the recent AGM of Donegal MD, Cllr Sweeny thanked his fellow councillors and council staff for their contribution during a challenging year.

“A year ago we were still in very uncertain times,” he said. “We didn’t know what lay ahead.

But it was a good enough transition period out of Covid.

“It is great to see businesses getting back up and running, festivals and events going again, people getting out and about and getting back to work.

“To think we are now at record employment levels and we are talking about staff shortages. It is amazing to think that this happened within the last year. There are plenty of challenges that will come with that.

“It is great to see council services back open, great to get back opening doors.”

Cllr Sweeny said he had attended many events since restrictions were lifted. He highlighted several such events, including the opening of the Bluestack Shack at the Bluestack Special Needs Foundation in Donegal Town and the launch of the weaving course in Kilcar.

The councillor also spoke about the benefits of the Atlantic Technological University (ATU).

“That is a really positive thing for the district,” he said. “Killybegs is one of the main campuses. It bodes well for the future of this MD.”

Cllr Sweeny said the way we had embraced outdoor dining was a big positive for Donegal.

He said: “That has led to some of the massive projects that are in line now - Bundoran and Donegal Town developing outdoor spaces. That will tap into regeneration projects and plans that we have in place.

He also praised historic towns initiative which had a very positive impact on Ballyshannon.

“It is great to see derelict buildings brought back to a secure situation,” he said.

“As well as securing the positive heritage of the building, the paint makes a big difference. The next stage is making use of those buildings, not just to put a coat of paint on the outside. There is a lot of work going on in that area.”

The outgoing Cathaoirleach reminded councillors that it had been a turbulent year for fisheries.

“We will all assist in any way we can to help progress and solve the fishing issues in our district,” he said, adding: “We see the investment in our piers and harbours and that is a positive - Ballyshannon, plans for Inver, Kilcar, Donegal Town.”

The councillor praised council staff for maintaining services through all the challenges of Covid-19, and for rising to the new challenges that came with the pandemic.

“Great credit must be given to them for dealing with all that has been thrown at them,” said Cllr Sweeny.

He also reflected on the new cross border working group.

“We are stronger together,” he said.

Cllr Sweeny cited one big issue that had not been resolved.

“One of my disappointments is that we have no solid progress on the fire stations in Ballyshannon, Bundoran and Glencolmcille,” he said. “It is frustrating us all here. I will strive to find solutions to the problem there over the next year.”

Finally, the councillor thanked his fellow councillors for the strong team spirit within the MD. This was echoed by the other councillors who each thanked Cllr Sweeny for his work over the last year.

Cllr Niamh Kennedy (Ind) was then nominated by Cllr Noel Jordan (SF) as the next Cathaoirleach. This was seconded by Cllr Micheál Naughton (FF).

Cllr Tom Conaghan (Ind) was elected to the role of Leas Cathaoirleach.

“Thank you all very much, thank you for putting your faith in me for the next year ahead,” said Cllr Kennedy.