A packed congregation at the Church of the Irish Martyrs, Letterkenny was joined by hundreds more online 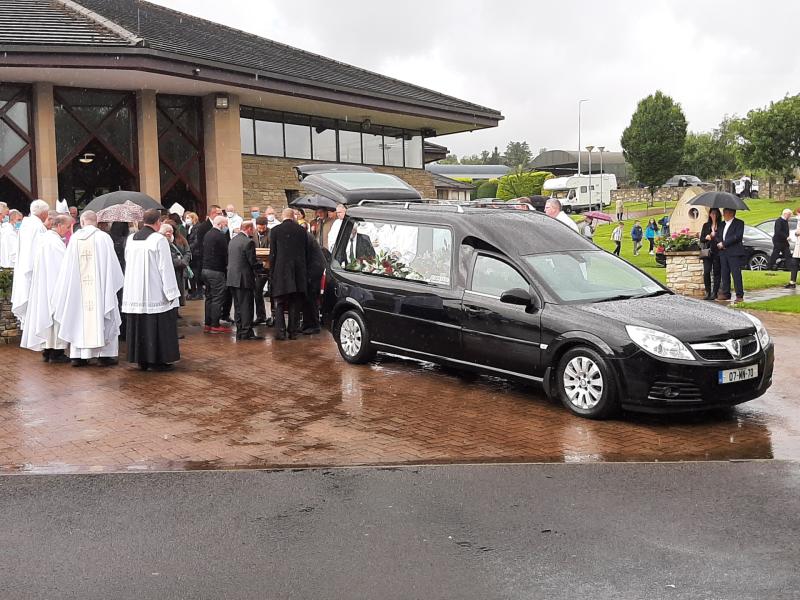 It was an emotional morning for many as the Requiem Funeral Mass for the Very Rev Brian Quinn, P.P. took place at the Church of the Irish Martyrs, Parish of Aughaninshin, Ballyraine, Letterkenny.

In the homily delivered by long time friend since studying for the priesthood together, Fr Charlie Byrne, P.P. spoke of the late 'mighty' Fr Quinn as being creative, imaginative, a great communicator, a great bridge builder who could connect and link in.

"He had a great engine with lots of enthusiasm and much energy for a man of small bulk," he said.

Fr Quinn’s (64) link with the church goes back to 1994 to which he was appointed Administrator after it opened.

Up to then, Letterkenny was mainly served by the Cathedral of St. Eunan and Columba.

The area of the Cathedral parish which the Irish Martyrs Church covered became the new parish of Aughaninshin in the year 2000.

The late Fr Quinn became its first Parish Priest, a role he performed with dedication, diligence and dutiful care, right up to his untimely passing last Sunday at Letterkenny University Hospital.

Chief celebrant Bishop of Raphoe, Alan McGuckian SJ, welcomed the very large congregation with words of comfort for family and friends and he was joined by many dozens of clergy from the diocese and beyond.

They were also joined by upwards of 700 others who watched proceedings online.

A deeply moving and personal homily was delivered by his long time friend, Fr Charlie Byrne P.P., Carrigart (Downings, Meevagh), who had travelled through the journey of becoming a priest together, over four decades ago.

He recalled: “Brian was very creative, imaginative, a great communicator, a great bridge builder who could connect and link in. He had a great engine with lots of enthusiasm and much energy for a man of small bulk.

“He was passionate about the Church and his vision of an inclusive, accountable and all embracing church and it was that passion that drove him into passionate engagement.

As clergy in the diocese of Raphoe we saw that many times over the years at various conferences, Ballina, Bundoran, Gweedore and many liturgical and musil conferences, he brought life to liturgy and liturgy to life.

He also mentioned his involvement in the Council of Priests and Cathicathical work.

“He organised and prepared well and did things well. Beyond Church and in Society, he was the same passionate, dedicated person, especially in the world of Sport.

GAA was his first love, football and hurling. He served as Chairperson of the Supporters Club in that monumental year when Donegal won Sam in 1992.

He served as Treasurer of the County Board. After that, he always acted at fundraising, especially after Sam returned in 2012. He was Chaplain for the county team for many years and celebrated Mass with them before big games. I recall many many great days with him at matches, championship Sunday in Ballybofey, Ulster games in Clones and Croke Park, best of tickets, league games, club games in muck, in the depth of winter.

“This Naomh Bríd club native, loyal Letterkenny Gaels man, not so fond of Naomh Adhamhnain, I’m told, was a very active member of the Association," he added with a respectful reference to the other great GAA club in Letterkenny, St Eunan's.

He will be deeply missed by his brothers, sisters, extended family and relations, and a wide circle of family, friends, fellow clergy and his parishioners to whom deepest sympathy is extended.

Read more in Thursday's edition of the Donegal Democrat