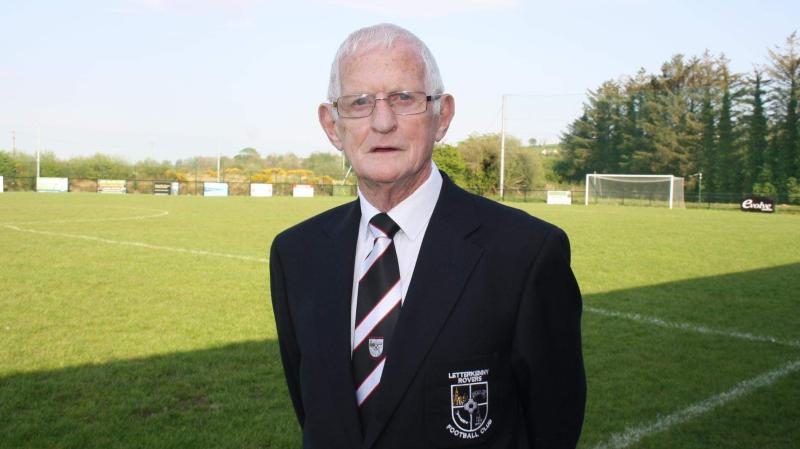 The town of Letterkenny and the footballing family has lost another dear friend with news on Saturday afternoon of the death of Liam Blake, Ard Colmcille, Letterkenny.

Liam had been in ill-health recently, and his passing will be met with deep sadness by all who knew him.

A kind neighbour and friend, Liam touched the lives of so many people who will remember him in so many ways, not least for his genuine warmth and friendliness.

Aside from his dear wife Patsy and his family, Liam’s other great love in life was football and especially Letterkenny Rovers FC.

He was club president of Letterkenny Rovers and few were prouder when his team ran out at the Aviva Stadium for the final of the FAI Intermediate Cup back in 2016.

Letterkenny Rovers have been leading the tributes this evening, describing Liam as one of life’s gentlemen.

“We are deeply saddened to learn of the passing of our Club President Liam Blake,” a club spokesperson said.

“An integral part of our history, Liam was one of life’s gentlemen who was cherished by everyone at the club.

“From his early days as a formidable player, to winning consecutive Donegal League titles as a manager alongside Dessie Kelly in 1981 and 1982, to his outstanding work as a groundsman at Leckview Park, Liam served the club with absolute distinction over so many years and in so many roles.

“He was a lovely man who we were proud to have as our Club President and who will never be forgotten.

“We wish to extend our deepest condolences to his wife Patsy and the Blake family.”

Liam was a brother of another former Rovers great, the late Eunan ‘Busty’ Blake; well known Letterkenny publican, the late Harry Blake and Rosie Oates (Sligo) who died in December.

Reposing at his late residence from 12 noon until 9 pm with Rosary each night on Sunday and Monday, July 3 and 4.

Funeral from there on Tuesday going to St. Eunan’s Cathedral Letterkenny for 11am Requiem Mass.  Interment afterwards in Conwal Cemetery.