One councillor tells them to "cut out the codology" 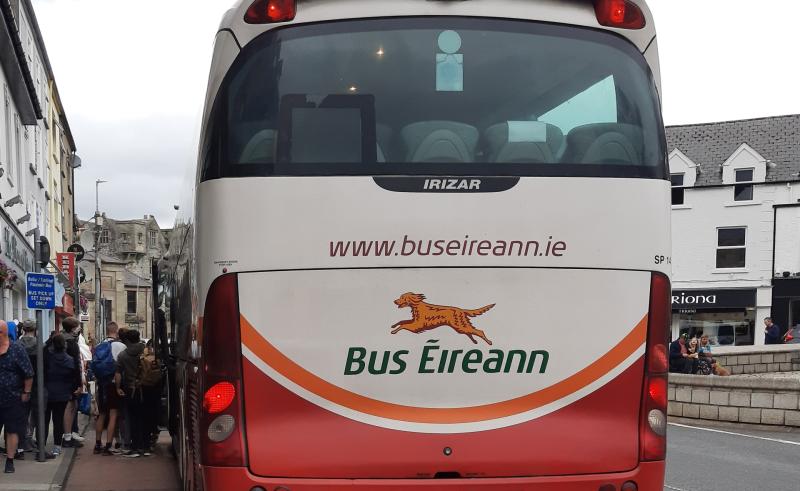 Passengers getting onto a Bus Éireann serice at Donegal Town

It is no longer acceptable or tenable for Bus Éireann to simply issue an apology, when their services to or from Donegal are cancelled or otherwise unavailable, often at the last minute.

That was the verdict when the issue was raised at Tuesday’s July meeting of the Donegal Municipal District in Donegal town, where Clr Noel Jordan (SF) said that this was not something the people of Donegal should accept from a public service provider.

He said that an apology was of little use or consequence to people who have missed vital hospital appointments in Dublin or flights due to the pulling of scheduled services.

He said that the only progress that had been made over recent times was the public were being told about the cancellations, rather than waiting for a bus at a bus stop that simply never arrives.

His Sinn Féin colleague, Cllr Michael McMahon said it was time that Bus Éireann “cut out the codology”.

He said that there was not much point in Transport Minister Eamon Ryan appealing  for people to use public transport, “when it’s not there”.

Addressing colleagues at the last monthly meeting before the summer recess, Cllr Jordan noted that there had been no response from Bus Éireann “yet again”, referencing previous correspondence from the Donegal MD with the state-owned bus and coach operator.

“This saga continues to roll on and every councillor has been contacted on this. It is not acceptable and not even for them to make a statement. We have asked them to come here and so far, there has been no response,” he said.

“The response that we are getting is that they regret the cancellations but in my opinion and talking to people on the ground, this is a staff issue. They went into Covid and re-deployed eight reserve drivers from the workforce.

“I welcome the fact that in the last number of weeks two drivers have been re-employed again but that is not enough for the services that they are advertising.

“Cancellations are nearly every second day, that is not acceptable, we are in a rural setting in Donegal. This is no consolation for people that are missing hospital meetings or flights. They are a public service provider that is not providing a public service.

“It is not acceptable to be stranded outside the Abbey (Hotel) or Dublin airport.  What we have seen from them is that they are advertising the cancellations now, but in the past, passengers only found out when the bus failed to turn up.”

Meanwhile Cllr McMahon said that it was very important on all levels that Bus Eireann engaged with the local representatives.

He told the meeting: “This government is fooling the people enough without adding public transport as well.”

Tourism was being hit as well with people wanting to travel by bus to and from Donegal.

He said that the issue was not the staff who were said “were professional in that they try to help out”.

He had spoken to a driver recently and he had told him how a bus that had already been booked could not stop for passengers enroute.

“He knew he was already booked. If the bus is booked for that morning, then you should automatically have a second bus. He said that the driver had stopped at three locations enroute to Dublin but was only allowed to lift the passengers that had previously booked theirs. Those that had not had to be left behind.”

“We need to meet with the Regulator, this is a complete breakdown of the system. You cannot tell the other passengers that they cannot get on the bus, if they have not booked a seat. At this stage we need an emergency meeting,” he stated.

He suggested more double decker buses to deal with the numbers or only online booking, as one solution.

He pointed out that “staff on the ground are courteous and professional, but they are getting the flak and this should not be the case.”

“Common sense is not prevailing with Bus Éireann and confidence in them is at an all time low. Let’s cut out the codology, it is not acceptable in this day and age. A quarter of the 2022 tourism season is already over. It’s a complete breakdown.”

Area Manager of Donegal MD, Pauric Sheerin assured councillors they would contact Bus Éireann again and convey the sentiments being expressed and invite them to a meeting.

“We can certainly do that,” he said.

They had already been written to on two previous occasions, he noted.