Crucial decision on wind farm projects due at council today

Environmental groups concern that their concerns may be bypassed 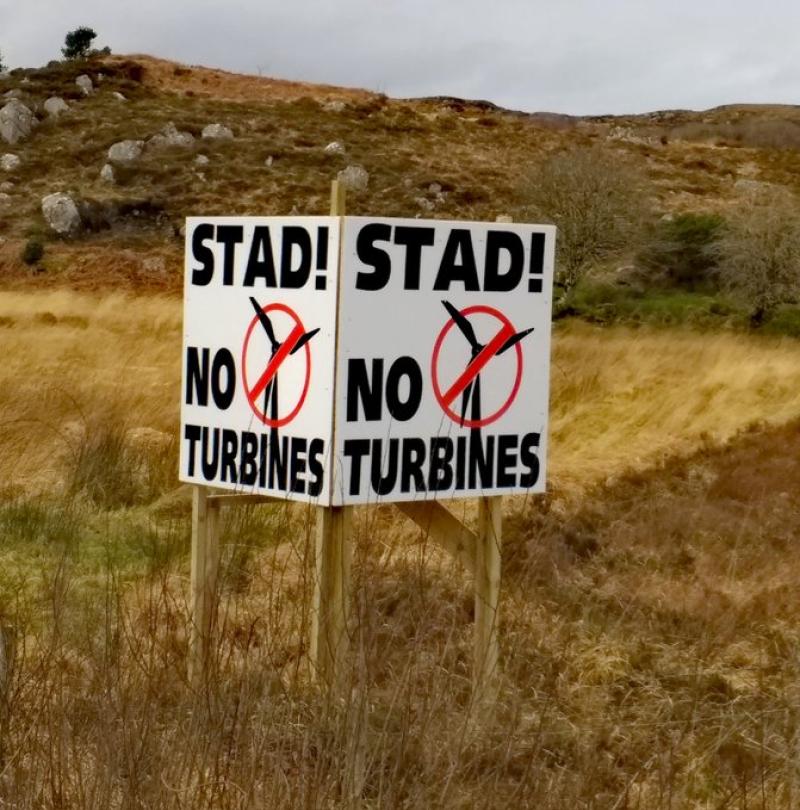 Five environmental groups from west Donegal have repeated their message today and sent a direct message to their local councillors asking them to "stick to your guns" and insist on measures that will protect the local environment from too many wind farms developments.

They have revealed today that they have conducted a review of submissions received in the recent public consultation which Donegal County Council received on a proposed variation of the 2018 – 2024 County Development Plan with respect to wind energy policy.

Council chief executive John McLaughlin has published, as required by law, a detailed analysis of the submissions received in the recent public consultation.

Twenty submissions were received from persons or companies in the wind energy sector 14 of which were site specific asking the council to have their sites rezoned as open to consideration for wind turbines.

The Office of Planning Regulator made a forceful submission declaring that the attempt by Donegal County Council to once again reinsert ten times tip height separation of turbines from homes was contrary to national policy.

The council had in the Variation acknowledged that there was a draft national policy to make that separation four times tip height but reasonably pointed out that government have never moved to put such a guideline in the statues.

Ten times tip height separation has been in the County Development Plan since 2016 despite two Ministerial Directions which were successfully challenged in High Court Judicial Reviews by former Cllr John Campbell.

Secondly the Regulator focussed heavily on the proposal to zone all areas of Landslide Susceptibility in the county as Not Normally Permissible for wind farm development.

This was inserted with particular reference to the calamitous bog slide at the Meenbog wind farm site outside Ballybofey and as such was a point that secured practically unanimous support from councillors.

Groups opposed to the ramping up of turbine placement in the county feel strongly that the CEO is ignoring the public outcry against the proliferation of turbines in sensitive landscapes in deference to many of the wind energy sector requests.

In his report to be formally presented to councillors at today’s plenary meeting, the CEO is making a recommendation that the direction of the Regulator must be followed. This is causing an outcry in communities battling huge odds against wind farm developments.

A spokesperson for the Gweebarra Conservation Group (GCG) is incensed that the CEO also recommends making the Gweebarra River Valley and the five Fresh Water Pearl Mussel rivers available for wind turbines and neither of these exclusion zones were dismissed by the Regulator.
They are calling on councillors to stand by a variation of policy already endorsed by their members and which has received overwhelming support from the public.

“Look at the example of Kerry councillors in the face of a similar lambasting from the Regulator. They directed their CEO to reject the Regulator’s opinion irrespective of the threat of Ministerial Direction.

"Kerry councillors pointed out to their manager that essentially enough is enough, that Kerry has some of the highest numbers of turbines in the country and that the Regulator could do well to focus on counties that were producing little or no wind energy.

"The exact same applies in Donegal and we are asking our councillors to stand by their own convictions expressed at meetings from November last through to March as aspects of the wind policy framework were hammered out. Moreover, and more importantly, to stand by the massive support the Variation got from the public”

The GCG spokesperson was particularly aggrieved that the report states that of the several hundred submissions received on the Gweebarra none provided a rationale for excluding turbines bar the exception of the Gweebarra Conservation Group.

“To accuse ordinary members of the public of not providing rationale is both unacceptable and not factually correct. Many of the submissions which are all available online speak to protecting our last wilderness areas and our boglands and therein they espouse the Gweebarra.

"Our campaign to save the Gweebarra from industrial exploitation has also received 5,284 signatures in an online petition.”

Long-time campaigner on multiple wind farm projects across the county Joseph Brennan claims that the CEO’s report is “unfair and heavy-handed”.

He points to how the 302 submissions from the public are summarised in a couple of paragraphs without direct quotations whereas the 20 submissions from the wind energy sector “are pored over and quoted at length in an effort to make another developer-led onslaught of wind turbines on our landscapes acceptable.”

He goes on comment that “it is disturbing to see how for the first time many individual consultants or landowners made requests in a public consultation process to have specific plots of land previously refused wind farm permission rezoned to be in Open to Consideration areas.

"None of these provided rationale, for instance, to developing their wind farm on peat lands. Yet in my own submission I provided council with lengthy testimony given by Dr Catherine Farrell and Professor Jane Stout (Trinity) to the Joint Oireachtas Committee on Climate Change in May 2021 wherein they stridently condemned the proposition of more turbines in peatlands.

"What caused the Meenbog burst? Looking at the Altnagapple / Mulmosog developer-led application for rezoning I see no rationale for developing this peatland site when all the science says that it is patently unwise to do so.

"It is worrying to see the CEO actually acknowledge that it does include an area of high landslide susceptibility and does encroach on a freshwater pearl mussel catchment and still cave in the request of Harley Newman, Planning Consultants.

"This and the rezoning of several other sites on similarly tenuous grounds clearly demonstrates that the CEO dismissed public opinion in favour of the wind developer lobby and that is quite simply unfair. Or worse.”

The future wind energy policy for the county is likely to lead to lively scenes at the council meeting today. Groups across the county will anxiously await and see will Donegal councillors remain steadfast in their views as counterparts in Kerry did.