Gardaí are silent on the matter - DUP wants an explanation! 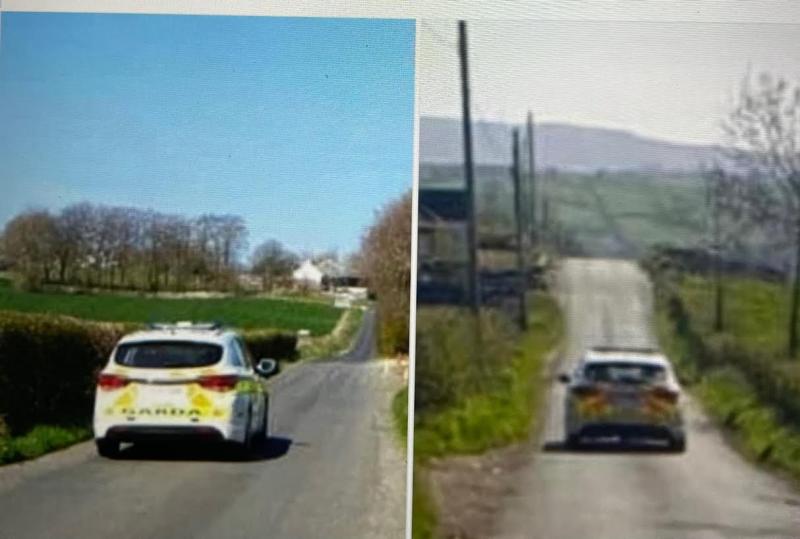 The garda car which was spotted by two different photographers on the Lurganboy Road just outside Castlederg, Co Tyrone earlier this week.

Mystery still surrounds how a garda patrol car ended up a few miles outside Castlederg in Co Tyrone a few days ago.

The PSNI say enquiries are continuing into the matter while gardaí here are saying nothing.

According to DUP councillor, Maurice Devenney, the vehicle - which was clearly marked garda - was observed travelling on the Lurganboy Road on the northern side of the border in the last few days and was "almost into Castlederg".

He said photographs showed the car travelling towards the town and then back towards the border.

According to locals, he said, the vehicle was "two miles or more" across the border.

"I have spoken to PSNI regarding it and they have informed me that if a car does cross into a different jurisdiction, there is a reporting mechanism if a mistake has been made.

"I can understand 100 yards or so when you realise you're not in your own territory but to be almost near Castlederg town, that's a long way from the border.

"I'm just raising concerns as to how this happened and what was the need for the garda car to be in that area."

Alderman Devenney said it's important that it's clarified if a report was made of the "incursion" to police by gardaí.

"This incident needs to be fully investigated, as it was well within the border," he said.

"I have written to the Garda Commissioner requesting a full investigation.

"These things must be fully investigated, and my colleagues on the Policing Board will be questioning the Chief Constable on this particular issue as well."

Speaking of the incident, PSNI Inspector Robb said: "We are aware and we are making enquiries."

The Garda Press Office was contacted on Tuesday and Wednesday for a comment but at the time of going to press all they would say is the query had been passed to the relevant department and a response will be issued in due course.