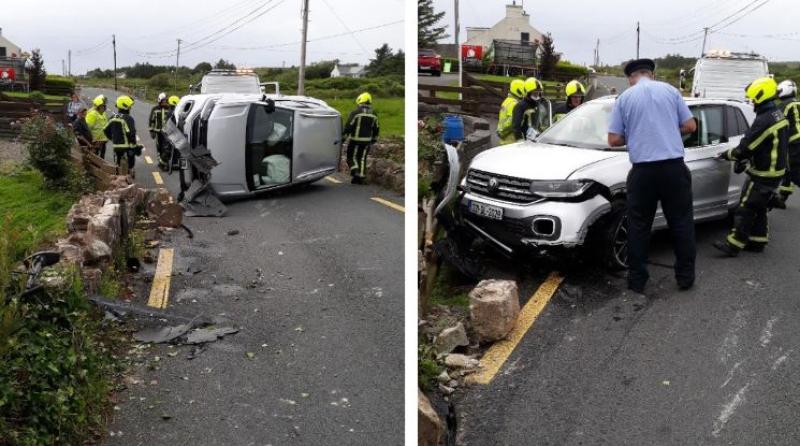 Gardí and the emergency services at Bunawillian bridge, Meenbanad earlier this week the scene of the crash at

Unless major infrastructural work was carried out immediately at a bridge in the heart of west Donegal lives will be lost.

That was the claim from independent councillor Micheál Choilm Mac Giolla Easbuig following a near-fatal crash earlier this week at Bunawillian bridge, Meenbanad.

"This is an accident black spot. Locals tell me every time they hear a bang on this part of the road they are expecting a crash and a possible fatality.

"This has been an ongoing issue for many years. I have asked Donegal County Council to come out and start work here immediately. They told me today they are going to get a road safety team to draw up a design to make it safe. It might take a couple of months but I'm confident we will get something.

"This is a very busy road in the Rosses as it's used by people travelling from Dungloe to Keadue, Kincasslagh, Cruit, and Belcruit. I feel the council needs to put up signage and get the hedges cut so vision lines can be improved.

"I know land owners have a certain responsibility in this matter but it could take time for the council to make contact with them and as we are coming into the holiday season, it could take a while to contact everyone."

He added it was unfair to the local community to have to navigate through narrow roads that often had lorries, buses, holiday traffic, and people going to bars, hotels, the golf course, sports grounds, and schools.

"The residents are so frightened that they won't allow their children to walk on this road anymore. This is now a major health and safety issue," he added.

A local who lives near the bridge outlined the dangers he has witnessed at that section of the road over the past few years.

"This is the third incident in the last three to four years and still no remedial works have been completed by the council.

"The previous incidents include a jeep and trailer hitting and crashing through the wall into the field. The temporary barrier put up after this is still in place after four years. Three years ago there was an incident involving French tourists colliding with another vehicle. 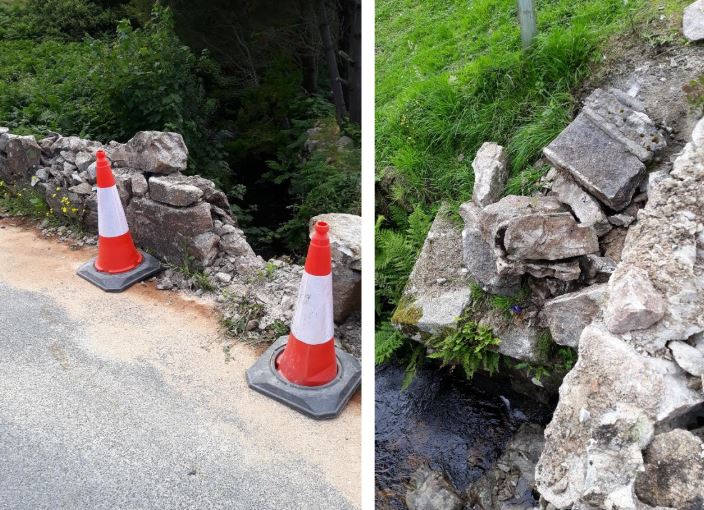 The damage at the bridge

"The bridge and stonework need to be repaired, widened if possible and signage erected.

"The placement of yellow lines on this route has also not assisted as all drivers going in both directions are trying to remain within yellow lines.

"This has led to a number of close calls on this section of road from Keadue crossroads to Meenbanad crossroads and also along the side of the road at Lough Atercan.

"This road receives just as much traffic as the N56 route and yet receives no upgrades, signage and it is not even gritted in the winter," said the resident.