A frequent visitor to the home of his parents, Cormac McLaughlin passed away in the US after a fundraising campaign to get pioneering treatment 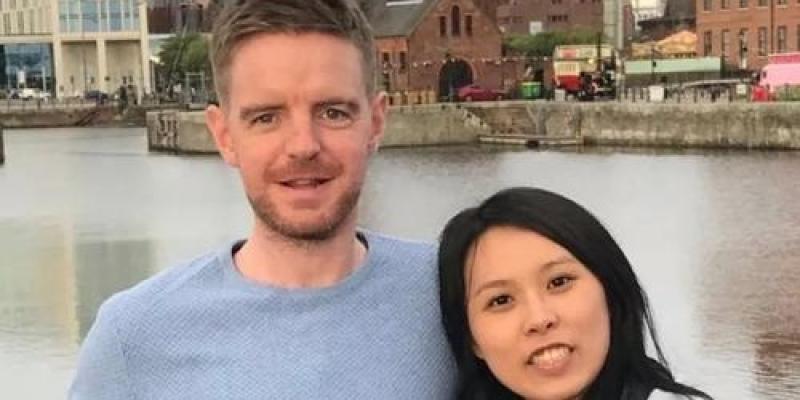 Cormac McLaughlin pictured along with his wife Krystal, passed away on Saturday in Texas where he was preparing to receive pioneering treatment at a leading cancer hospital

An uncle of a young man with strong Buncrana connections who passed away in the US where he was getting treatment for a brain tumour has hailed the support the family has received from people in the area.

Cormac McLaughlin,39, who was from Castlederg,  Co Tyrone, passed away on Saturday in Texas where he was preparing to receive pioneering treatment at a leading cancer hospital.

He is the son of Rhona (née Hegarty) and the late Charlie McLaughlin, who were both from Buncrana. His brother Darragh lives in the town and he has a sister Niamh who lives in Liverpool.

Mr McLaughlin was a frequent visitor to Buncrana, spending his summer holidays as a child in Inishowen. He was a grandson of the late Dr Denis McLaughlin from Buncrana and the late local publican Phil Hegarty.

The teacher, who had lived in England,  Rome and Hong Kong, was diagnosed with an aggressive, life-threatening brain tumour in Easter 2021. After marrying his fiancé Krystal in Hong Kong,  he came home to receive treatment in Belfast. A fundraising campaign had raised more than €200,000 for his treatment and he travelled to the US earlier this year to begin trials.

He was awaiting targeted radiotherapy last month when he suffered a series of unexpected catastrophic seizures. He passed away in intensive care while efforts were ongoing to bring him home in an air ambulance.

Arrangements are being made to bring him home from the US.

Cormac's uncle, Feargal McLaughlin, a Buncrana-based auctioneer, said the family were very grateful to everyone in the area who had donated to the fundraising campaign.

“It is an awful shock to the whole family,” he said.

“About a week ago he took a turn for the worst and they were trying to get him home by air ambulance. The family is very grateful to all the people who donated. A lot of local people donated and held events.

In a post on the fundraising campaign’s Facebook page, the family said Cormac’s  “initial good progress just wasn’t to last”.

“His body had battled so hard for the last 18 months and it took its toll. Cormac just wasn’t strong or stable enough in the end to fly home.”

The family said money donated to get him home will still be spent to do so.

“We are eternally grateful for all your financial support so that Cormac had the chance to access the trial and other treatment options approved in America, in one of the best cancer hospitals in the world. He said he always wanted to ‘try everything’ and fight this as hard as he could.”