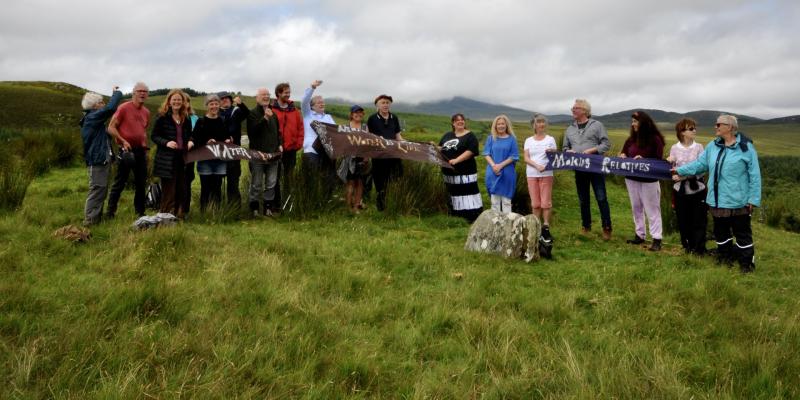 The company which has been granted renewed licences for prospecting for gold in Inishowen says it is two years behind in its work in the peninsula.

Minister for Environment Eamon Ryan renewed the licences in April for Arkle Resources Ltd to prospect for gold and silver in two areas in east and central Inishowen totalling 84 square km.

The renewal of the licences has prompted concern from campaigners who fear the impact that any future mining would have on the environment and health.

In a statement to the Inish Times, John Teeling, the chairman of Arkle, said the company is planning a work programme in the areas it has been granted the licences for, which will “involve prospecting and exploration and will likely include some drill holes”.
“Between Covid and extensive delays in renewing our prospecting licences we are two years behind in our work,” he said.
Mr Teeling said there is “a clear distinction between exploration and mining”.
“Arkle has explored in Donegal for years. Exploration is unobtrusive. It involves satellite imagery, walking roads and fields and, if that is successful, using a small rig to drill holes. Drill sites are rehabilitated once the work is done.
“We have worked in Ireland for decades always with the agreement of the landowners, always in full compliance with the rules and, importantly, in harmony with locals. That is as it should and must be.”
Mr Teeling said that “as an explorer”, he would not comment on mining but added that “modern mining can exist in perfect harmony with the community and with the environment,” citing the example of new mines in Finland and Sweden.
The preparation of the work for the renewed prospecting comes as campaigners opposed to mining in the peninsula say they will continue to oppose the work of the company.

A US activist who has raised concerns about the impact of mining in her native South Dakota visited Inishowen last month to lend support to local campaigners.
Emma B Mincks, an activist, academic and writer, was hosted by Save Inishowen from Gold Mining.
During her time in Inishowen, she visited the ring fort at Glengother near Carndonagh, which is in one of the areas that a licence for prospecting has been granted.
She said she found Inishowen “incredible as a visitor”.
“All of the vastness of biodiversity was astounding. There were so many different mosses and types of ground,” she said.
On the visit to Glentogher, she said she was “shocked that this place, with such delicate, sacred, and historically important landscape is the site of prospecting”.
She said the whole island of Ireland is being targeted for prospecting and extraction.
“The multinational mining industry has the same strategy everywhere. The campaigners in Inishowen are up against a lot in the way these companies move,” she said.
“People need to be aware that this is happening. There are campaigns now in the Sperrins, Leitrim and Inishowen and I think it is still possible to stop some of the mining from going ahead as long as the public knows it is happening and is aware of the tactics mining companies use to divide communities.”