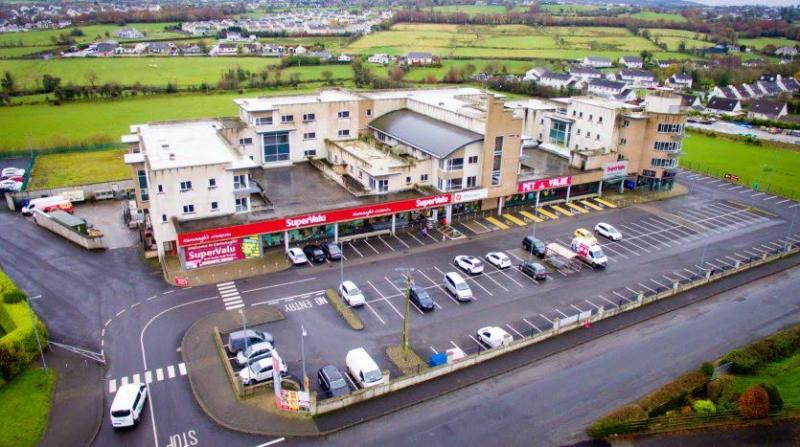 A €7 million apartment complex above a shopping centre on the outskirts of Ballybofey could be ready for occupation in two to four weeks' time.

That's the prediction of the chief executive of the organisation involved in refurbishing 47 apartments situated above the Finn Valley Shopping Centre on Trusk Road which at present contains Kavanagh's SuperValu supermarket, a pharmacy, a pet shop, and a hair salon on its ground floor.

Interest in the development has been heightened in recent times when work began on renewing the apartments. They were in a run-down state and frankly an eyesore.

Chief executive of the organisation behind the development, The Remcoll Group, Paul Collins has revealed this part of a €50 million investment they have earmarked for Donegal.

Rumours
Rumours were rife in the locality that once finished the apartments had been earmarked for up to 300 Ukrainian refugees but Mr Collins pointed out the 47 apartments could only at most hold around 200 people and no decision had been made on who would get them.

He explained The Remcoll Group was not an ordinary property investment and property advisory organisation. he described them as a “reasonably low profile organisation” with interests all over the country.

“We are a social infrastructure provider, an independent property investment and property advisory team. We believe in investment with a social purpose. Doing business while doing good is very important to us. Our organisation was built to accomplish a social mission - to give everyone the right to a home.

He said the company also works closely with Approved Housing Bodies (AHBs), such as Respond, Focus Ireland, and Peter McVerry Trust, and local authorities to deliver complete residential developments that meet their standards of accommodation and estate management criteria.
He said work at the Ballybofey building would be completed within the next two to four weeks.

“I don't know what will happen then. It's above my pay grade as to who gets the shelter. My job is to put the shelter there. It's someone else's job to decide who actually requires the shelter. Our organisation makes the space available to the State for whatever needs they have, we are not the decider.

"They are always the first people we offer it to and then if there is a need, that need will be taken up and if there's not, we put it back out to the private market, but we do very little for the private market.”

He added work on this apartment complex “has been a bit of a task” but in fairness to the workers, there was a lot to be done. The total investment here is almost € 7 million.

Mr Collins revealed they had to invest approximately €4.5 million to bring the apartments up to the required standard. This was on top of the cost of the buildings which he said cost them around €2 million.

“What I'm hoping is that there will be 47 different families living in there before Christmas. I'm hoping they will be a part of the local community as well. Yes, you could say this will be an early Christmas present for these families.”

The extent of the Remcoll investment in Donegal is quite impressive, coming to nearly €50 million.
They have already invested around €40 million in providing the 55,000 square foot four storey Donegal Primary Care Centre in Donegal Town which currently has two tenants, the HSE and Tusla.

“We have large long-term investments in Donegal and we don't intend to leave. We are looking for investment opportunities all the time. We will look at any location down to 150 people. If there is a social need we will go there," he added.

Ukrainian situation
Meanwhile, a spokesperson for the Department of Children, Equality, Disability, Integration, and Youth responded to a query by this newspaper on the rumour that more refugees were coming to the town. He said there are no definite plans at present to accommodate additional Ukraine BOTPs (Beneficiary of Temporary Protection) in Ballybofey.