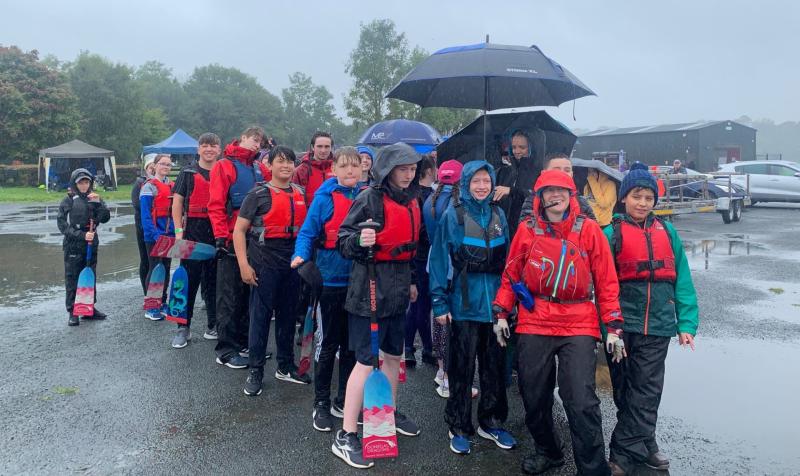 Donegal Dolphins in good spirits ahead of the final race

Most participants’ abiding memory of Leitrim’s first dragon boat regatta will be the relentless rain.

But for junior team Donegal Dolphins, the day will be long remembered as their first win. The deserving champions put in a superb performance in their third and final race at Lough Rynn to finish ahead of their more experienced rivals, the Barrow Dragons from Athy with their two best combined times.

Furthermore, this inspirational young team finished fourth in the overall rankings, ahead of most of the adult teams taking part, and indeed, faster than two adult teams that reached the final in their own category.

Coach and race helm Dr Beverly Huss said: “Donegal Dolphins had a great day racing at the IDBA regatta at Lough Rinn this weekend. They were delighted to come home as U18 champions.

“After just a year together on the water they have formed a great team and their technique and timing brought them home with times faster than a number of experienced adult crews as well as their U18 rivals Barrow dragons from Athy who had beaten them earlier in the year.

“A number of them were also welcomed as drummers for other teams from around the country.”

Ranging in age from 11 to 18 years, they have been training together every week over the summer.

Dr Huss continued: “The hard work and determination on the day paid off.

“They had great support from friends and family who travelled and spirits weren't dampened in spite of the rain.

“We would like to thank everyone who's encouraged and supported them over the year, on and off the water.”

It was a really family affair, with two pairs of brothers on the boat, as well as a brother and sister pair. There were also five Mums racing on the day with the adult team, Donegal Dragons, with another Mum being coach / crew manager on the day.

This young team has really captured the spirit of dragon boating where it is crucial to work in perfect synch. Donegal Dolphins have shown maturity and coachability that is the envy of many adult clubs, and they came in for much praise on the day from the wider dragon boat community.

In the open category, Donegal Dragons also put in a superb performance, finishing second by only 0.4 seconds over the 500m race, just pipped by Dublin Vikings.

This marks the end of a fantastic season for the club.

More information on dragon boating in Donegal can be found on the Donegal Dragons Facebook page.

The regatta was hosted by the Irish Dragon Boat Association. In previous years, this final event of the season takes place in the Grand Canal Dock, Dublin over two days. However, due to the Garth Brooks concerts, permission was not granted this year.

Feedback from participants was that the Lough Rynn venue with it’s marked lanes and excellent parking and sanitary facilities would be a more popular choice in future years.

It certainly suited the Donegal teams in terms of proximity as well as being a great place to race.