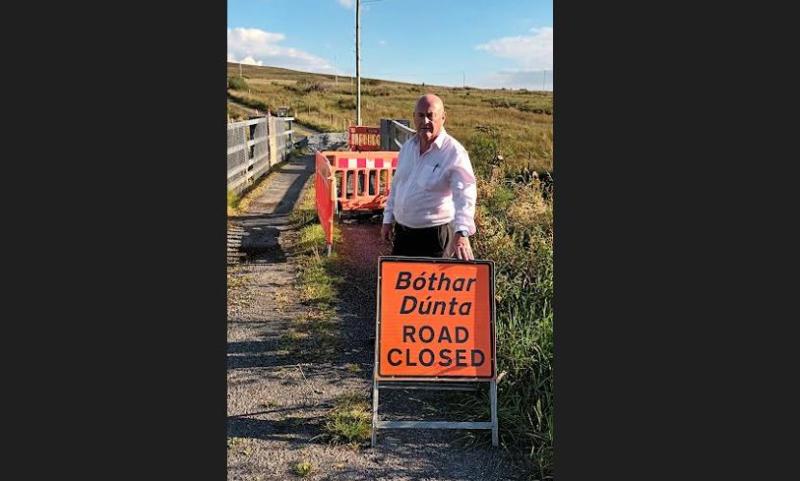 Cllr Patrick McGowan at the Ardbatt bridge in Glenfin

Problems surrounding the Ardbatt bridge in Glenfin were raised at today's online meeting of the Lifford-Stranorlar Municipal District.

MD cathaoirleach Cllr Patrick McGowan pointed out it was nearly a year since the bridge was closed.

He added the community wanted some work sooner because at the moment farmers and residents had to go miles out of their way to get from one part to another.

"I'd like to get a report stating what and when it's going to be done."

His call was backed by Cllr Martin Harley who said he had also been approached by several people in the community who were being inconvenienced by the closure.

Senior council engineer, Claire McGeever said she understood the council's road design section was going to issue an update in relation to this bridge

"My understanding is the bridge is closed due to a defect on the deck. It's unsafe for traffic and can't open until the bridge is repaired."

She added a report was done earlier in the year in relation to it and the preferred option was a new bridge.

"It's quite a substantial project. It will need to be screened for environmental considerations because it is in a Special Area of Conservation (SAC). That will determine whether it will have to go to An Bord Pleanála or it's a Part 8. So there's quite a bit there that's going to require land acquisition. It's open to pedestrians at the moment but the bridge is just not sound for traffic.

Ms McGeever said she would get a more up-to-date report from the council's road design section and forward it to all councillors.