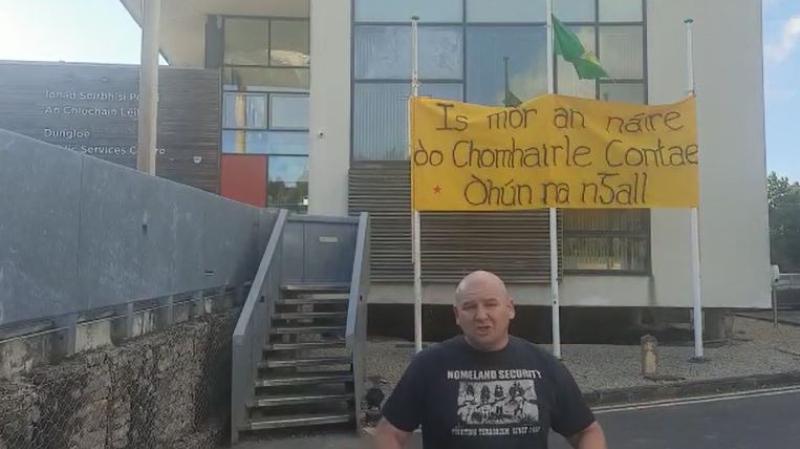 Controversy has erupted in Donegal over the flying of the national flag at half-mast at council buildings to mark Britain’s Queen Elizabeth II's funeral which took place earlier today.

The request was made to Donegal County Council by the Department of the Taoiseach last Thursday afternoon and forwarded on by chief executive John McLaughlin to all departments and local councillors the following morning. He said arrangements were being put in place to fly the flag at half-mast.

The message from the taoiseach's office read “I would appreciate if you could arrange for the flying, at half-mast, of the National Flag from all buildings, if any, under your control equipped with a permanent flagpole on Monday 19 September 2022, the day of the funeral of Her Majesty Queen Elizabeth II.”

It prompted a reaction from independent west Donegal councillor, Micheál Choilm Mac Giolla Easbuig who said council members should have been consulted before any decision was reached.

He added he had been contacted by staff in various council offices who said they were uncomfortable with the idea.

The councillor admitted he erected a banner on the flagpoles in front of the council's Public Service Centre in Dungloe which stated, ‘Shame on Donegal County Council’, in Irish.

He also travelled to the council office in Letterkenny today where he raised the tricolour from its half-mast position and then proceeded to put a video of the incident up on social media.

He said he knew council staff were unhappy with the flag situation.

“Some told me they were going to walk out and others said they just would not go to work. The political establishment has deliberately forced this on to communities and workers who clearly are opposed to it,” he said.

He added a former councillor Eddie Fullerton, whose picture hangs in the main council chamber, was murdered by loyalists who were armed, directed and organised by the British military.

“The Queen of England, the foreign monarch we are talking about, is their head. What does our Government want us to do next, have a celebrate Oliver Cromwell day?"

It appears few of the other 36 councillors in the county have taken issue with the lowering of the Irish flag to half-mast, at least many of them have not made any public declarations on the matter.

A spokesperson for the main union in the council, Foras, said they received no indication from members that there would be an organized walkout over the flag-lowering.

“No one has told us they were taking action as a group but that doesn't mean individuals might decide to act independently.”

It is understood the council brought in an access platform or cherry picker to their Dungloe office yesterday afternoon to remove Cllr Mac Giolla Easbuig's banner.

Donegal County Council was asked for a comment on the walk-out claims but at the time of going to press, it had not responded to the query.