Watch: Ollie Horgan in no mood for 'moral victory' after derby defeat 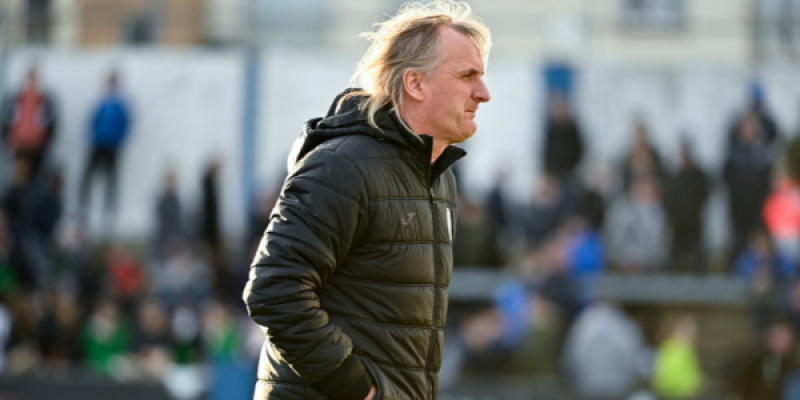 Ollie Horgan says he isn’t in the mood for a ‘moral victory’ after his Finn Harps were beaten by Derry City in the north-west derby at Finn Park.

Goals by Cameron McJannett and Will Patching sent Derry on their way to victory in Ballybofey that restores their six-point lead at the top of the Premier Division.

A late Filip Mihaljević penalty proved scant consolation for Harps, who are ninth with one win from the season’s opening quarter.

“We’ve had them for too many years.

“It’s disappointing that we got undone by two set pieces. We’re very disappointed with the concession of the free kick. There is a bit of deja vu with Derry last year, Dundalk last year, in the same corner of the pitch.

“Derry are a proper side. In the first half, they had a lot of very good patterns of play and caused us bother. We eventually got to grips with it and they came up with a set piece.

“That’s why they’re top of the table: They don’t care about scoring a wonder goal from open play. They got two set pieces, three points and up the road they go.”

Horgan admitted that it took his side ‘a long while’ to get to grips with the Candystripes.

“When we did, there was nothing in it in the second half,” the Harps manager said.

“Maybe their set pieces were better than our’s and a moment of class from Patching ended the game.

The defeat means Harps have ended a sequence of three home games with just one point from a possible nine.

Horgan said; “We have a habit of wakening up when we go a goal behind. Maybe the fact that we conceded relatively early, we had time to claw it back.

“It is disappointing that we got undone from a corner against Shamrock Rovers too. We have different personnel there now that we had and maybe that was their forte, getting their head to it.”

Horgan’s team travel to Bohemians on Good Friday and the Harps boss praised the home support who roared his side to the finish.