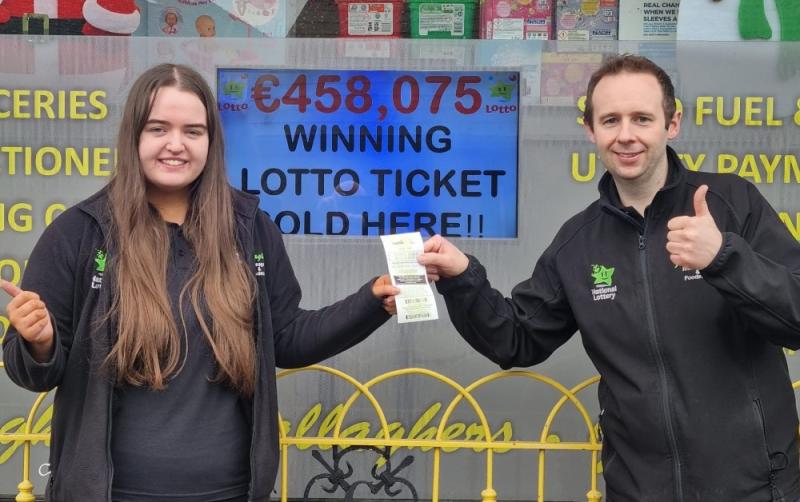 Aoife Lafferty and Brian Gallagher, Manager of the family-run Gallagher’s Newsagents in Lifford Co. Donegal celebrate after it was confirmed that one of their customers won a €458,075 Lotto prize

The record-breaking €19,060,800 Lotto jackpot frustratingly remains up for grabs again after Saturday night’s jackpot draw continued to roll without a winner.

The jackpot prize has now been rolling over since October 2, without a winner.

Over 171,000 players across Ireland won prizes in Saturday night’s Lotto and Lotto Plus games including two players from Dublin and Donegal who shared the Match 5 + Bonus prize pool worth a massive €915,150.

As no additional funds were added to the capped Lotto jackpot, the funds that would usually go to the jackpot were instead distributed to the next prize tier at which there was a winner and in last night’s draw, this was the Match 5+Bonus category.

The National Lottery are urging players in Castleknock in Dublin 15 and in Lifford in Co. Donegal to check their tickets carefully after both players matched five numbers and the bonus in last night’s draw to win €458,075 each.

Brian Gallagher who manages the family-owned Gallagher’s Newsagents in Lifford with his father Christopher, has called on their local customers to check their tickets to see if they are one of Saturday night’s big Lotto winners.

He said: “There is a massive buzz in Lifford this morning! We got the call with the good news from the National Lottery last night and we have been inundated with well-wishers and indeed players who are this morning checking their tickets to see if they are the lucky winner.

"This is a local store in such a lovely community so we know that whoever the winner is, every single person in Lifford will be absolutely delighted for them. This is an amazing prize to win, especially just before Christmas so we hope that they truly enjoy it.”

The jackpot has been capped and rolling over since Saturday, October 2.

There has been some criticism about the amount of times the Lotto bonus has rolled over, with Bernard Durkan TD raising the issue in the Dáil recently.

Taoiseach Micheál Martin also suggested the National Lottery regulator could appear before a Dáil committee on the issue.