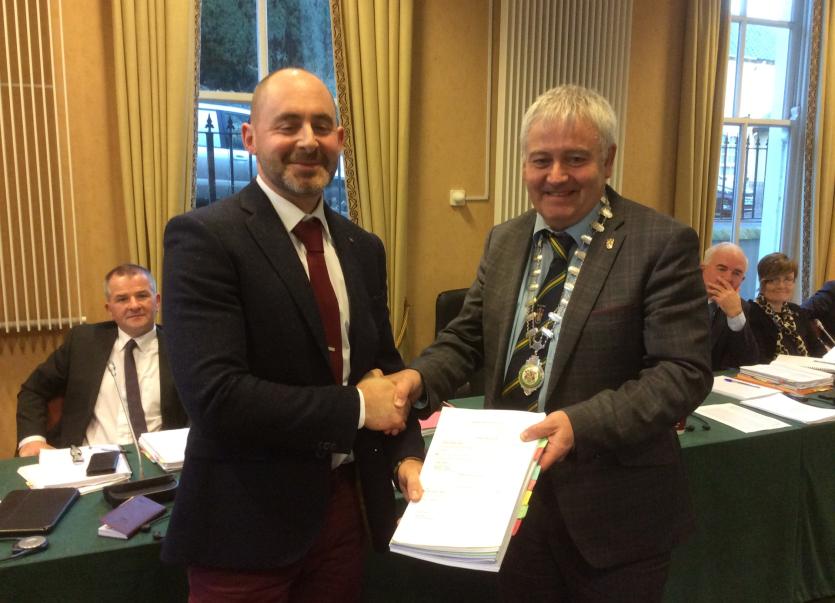 Donegal’s newest county councillor has taken his seat in the council chamber in Lifford for the first time.
Drimarone native Seamus Maguire was co-opted onto the council following the unexpected resignation earlier this month of independent councillor John Campbell.
The teacher at St Columba’s College in Stranorlar took up his seat at Monday’s council meeting.
Family, friends and supporters, including Donegal independent TD Thomas Pringle, gathered in the chamber.
His co-option was proposed by Cllr Michael Cholm Mac Giolla Easbuig and seconded by Cllr Michael McBride, who offered his support. He also thanked John Campbell, who was also present, for his contribution.
Cllr Michael Mac Giolla Easbuig said Cllr Maguire has a lot of work to do but he believed he would work hard.
He said he had no doubt that Mr Maguire would leave his own mark on the position.
He thanked John Campbell for his work and praised him for his passion. “There is a hole in the council today without you,” he said.
Cllr Noel Jordan (SF) said it was a very proud day for Mr Maguire’s parents Eileen and Denis, who were in the chamber.
Cllr Martin Farren (Lab) said it was a very proud day for the new councillor.
Michael Naughton (FF) said: “We look forward to working with you greatly in the months ahead.”
Council Chief Executive Seamus Neely extended a warm welcome and congratulated the new councillor.
He also acknowledged the contribution of John Campbell, especially for his work in his year as cathaoirleach.
Cllr Maguire expressed his condolences to the families of the four young men who died in west Donegal.
He said it was a huge honour for him to sit on the council and he was looking forward to getting to deal with the many issues in his area.