Obituary: Bernie Regan, Kinlough - lived her life on her terms

A great ally respected by everyone she met 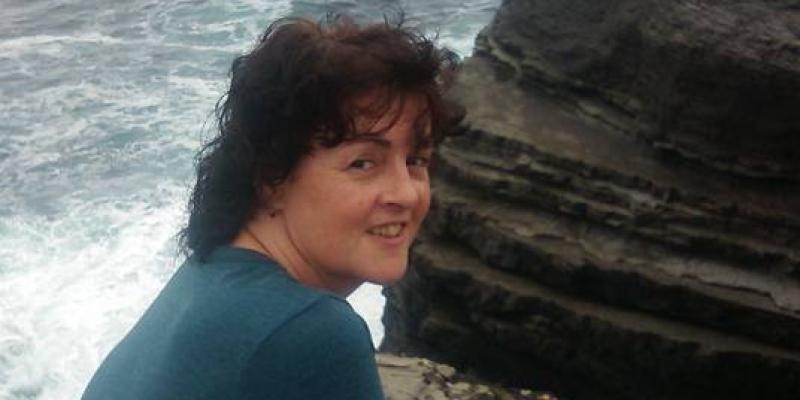 Bernie Regan struck an effortless balance between family and friends, work, and play

In 1977, at the age of 17, my brother Barbour first set eyes on his soulmate. Her name was Berni McHugh. She was 13. She was standing behind the counter in the small shop in Kinlough run by her mother Gertie (neé Fergus). Nothing would ever stand between them again.

Berni, the middle child of five, had like all her siblings been born in England. Her parents returned home in the 1970’s (Gertie was from Dartry, Leitrim, Jim from Screen, Sligo) to run the Melvin Hotel in Kinlough. It would, under their management, become a thriving establishment that drew crowds from across the northwest.

Just as Berni and Barbour’s budding young love began to blossom, the McHugh’s decided to return to England. It left what would have been between most teenage sweethearts an insurmountable divide. Initially, it was bridged by love letters. Then with phone calls at 7pm each Thursday evening from a public payphone in a bar in Tullaghan to another on a street in Doncaster. When Barbour declared late that year that he was heading to Doncaster on his Kawasaki z650 it was clear to everyone that this was serious.

Gertie and Jim opened their home to this long-haired, leather-clad, north Leitrim lad who had come to claim the heart of their daughter. With Berni still in school, Barbour got work down the coalmines in Rossington. This would set the trend for the 44-years they would spend together: they would do whatever was necessary to be together and provide for each other and their future family.

The needs-must nature of the times combined with a relentless work ethic and an openness to adventure and providence landed them in scenarios reminiscent of a coming of age, working-class-heroes, romantic comedy. The soundtrack would feature Thin Lizzy, Meatloaf, Led Zeppelin, Van Morrison, AC/DC, Fleetwood Mac, and Bonnie Tyler, amongst other giants of rock, with some Tommy Macken and Liam Clancy thrown in for some good folksy measure.

Nothing fazed them. Barbour cut his teeth as an apprentice steel fixer in Sellafield before heading north for work in Leuchars Airfield in Scotland. Berni, just 16, left home to join him, working in Old Waverly Hotel, Edinburgh, to train as a receptionist. At one stage, while living with Berni’s brother and his mate in a caravan in the sticks outside Cupar in rural east Scotland, they were tracked down by three of Barbour’s renegade friends from Kinlough who were looking for a start. Work at the time was about as sparse as space in the caravan where all seven ended up spending the long, cold winter. While Barbour headed daily for Leuchars, Berni and the five other lads took up seasonal work picking turnips for the local farmers for £12 a day and all the ‘nips you could eat. Berni never flinched nor complained. She was living her life on her terms.

As things started to pick up in London they moved south in 1983 and made a life for themselves, buying their first home while Berni worked for JVC and Barbour went out on his own employing 12 men steel-fixing on sites across the city. They found their tribes amongst the members of the Tír Conaill Gaels GAA club and the motorbike enthusiasts they raced and toured with. The couple became welcome and familiar sights during the summers back home in Ireland in the 1980’s, flying around the highroads and byroads on motorbikes and in sports cars. They even managed to give tractors an edge. To us kids they were movie-stars dropping in on a local drama production and we relished their visits. Berni lived in our house the summer of 1980, having accompanied Barbour home from England aged just 16. She features amongst my earliest memories as part of our family on some sun-kissed days spent on Mullachmore beach.

They were married in Doncaster in 1985. Their first daughter Tara arrived in 1988. Berni was just 23 but looked even younger. Behind her baby-face was a steely resolve. She didn’t suffer fools gladly and never took a step back. She was a great ally as those who got to know and respect her from her years of work in Dowra Mart came to appreciate. Many sympathisers at her wake spoke of her support for local farmers and her ability to put manners on any uppity dealer looking to take an unfair advantage. Throughout her life, Berni walked tall in a man’s world despite her diminutive frame. Coalmines, steelwork, construction sites, motorbike racing, football, cattle marts: she was respected by all she met from such male-dominated fraternities.

Berni and Barbour moved home from London in 1990 to a bungalow they built in Magheracar, Tullaghan. Two more daughters followed, Aoife and Keely. Work was scarce and once more they did whatever it took to make ends meet and make sure the girls wanted for nothing. This included Barbour taking up a job steel-fixing in Germany not long after Keely arrived in 1993. Berni reared the three children and ran the farm. At times they would sleep in the attic (floored with plywood and accessed by a ladder) so they could let the bedrooms out for B&B. Whatever it took.

They moved into in 2003 their dream house on Kinlough high road over-looking the village and Donegal Bay. Here Berni came into her own as she and Barbour designed and built a home that reflected their passions and manifested their dreams. Self-taught, Berni became skilled in growing and preserving fruit and vegetables and home baking. They kept cattle, sheep, poultry, and rare breed pigs. They became self-sufficient. Their children and grandchildren (Levi, Zack, and Sienna) added to their blessings and Berni’s lust for life.

Berni worked hard but she could play hard too. Her New Year’s Eve parties were legendary and were eagerly anticipated by her wide network of family and friends. She was a bundle of energy on a dancefloor or at a gig and guaranteed to get the party started. Berni and Barbour took a trip of a lifetime to India in 2015 taking in the Golden Triangle of Delhi, Agra, the home of the Taj Mahal, and Jaipur, and were enriched by the experience.

Loved life and the great outdoors

Bitten by the bug they bought a camper van on their return to Ireland, travelling along the Wild Atlantic Way. Berni loved every minute of it. She loved life and the great outdoors and was as comfortable hiking up the side of a mountain as she was working in the fields. She struck an effortless balance between family and friends, work, and play.

As with all relationships spanning decades, there were ups and downs, trials, and tribulations. But their relationship was built on a bedrock of solid love. Their adventures on motorbikes are a useful analogy for their shared love and life. To achieve the fun and excitement they sought, Barbour needed to occasionally throw their bike into corners at break-neck speed, secure in the knowledge that Berni too would lean fearlessly into a blind bend. Berni was someone who would always have his back, who no bump in the road could shake off. She was no pillion passenger; he was her co-driver. And to the very end of her journey, Berni’s was a life well-lived.