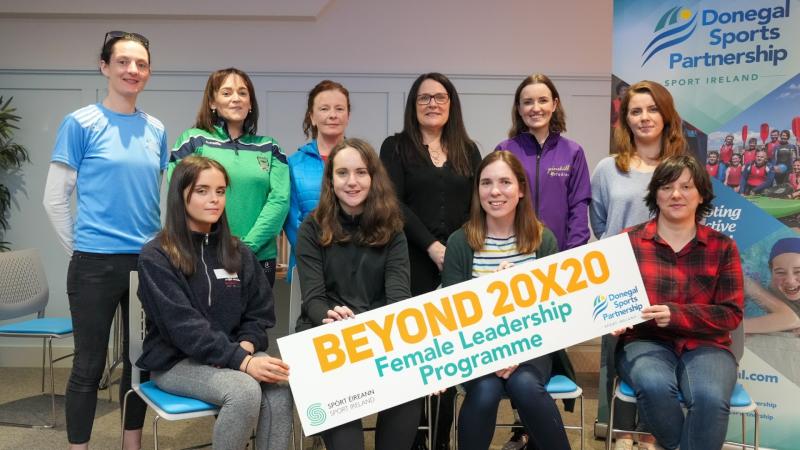 Welcoming the participants from various parts of the county to the induction session in Letterkenny at the weekend, Mr Sweeney said the "Beyond 20X20" initiative was about reducing the barriers in sport and participation.

"It's about building your skills so that you can reach your full potential - that's the vision we have," he commented.
"Sport Ireland has a Women in Sport department that is led by Nora Stapleton from Fahan. She's been involved in international rugby for years and played for Ireland. She's an excellent lead for Women in Sport and is a great advocate and a great supporter of sports partnerships as well.

Pointing out that he has a long association with the GAA, Mr Sweeney continued: "I used to go GAA county board meetings in my time. I would go in and look around and there'd be 40 men there representing their respective clubs, and not one woman. That's changing now. The gender gap is narrowing and that is down to people like yourself stepping forward to take on roles in clubs.

"I know that over the next two months you are going to get real benefit from the people who will be involved in delivering the programme. You'll also learn from yourselves as a group because every one of you has experience - whether you are with Ag Sugradh le Chéile, someone who works with wheelchair sports, a dance teacher, a student, or a sports person - you'll all be fit to share and that is where the strength of these programmes comes from."

The Donegal Sports Partnership's Female Leadership Programme is being led out by education and training coordinator, Maggie Farrelly.

"Maggie in her own right is flying the flag as well as a lot of you know," Mr Sweeney said. "Maggie is an intercounty referee in the GAA and recently became the first female to referee an intercounty National League match which is a huge, huge achievement because it is mainly a male-dominated area as well. So you are in good hands and I am certain you will all get something out of this," he added.

In her address, Ms Farrelly said there are eleven participants signed up for the new programme. "A leader has to take responsibility for their own actions, and I believe you have to give 110 per cent when you are taking on a leadership role. As Myles eluded to, sometimes we don't take the lead role because we might like someone else to do it or be happy enough just to sit in the background and support. But we never put our hand up and say 'why can't I do that?'. This is an opportunity for you to put your hand up and really go after something that you are passionate about.

"It isn't easy at times, but it's being able to stay with it. Part of the programme will look at your style of leadership, your resilience, your mindset and the factors that drive you," Ms Farrelly added.

"While it is only an eight-week course, we will support you over the next number of months. Just because the programme finishes officially on June 3rd doesn't necessarily mean the programme finishes for you. Because some of you might have no coaching qualifications in different areas, we will try to get you on to a coaching course and set up a mentoring pairing for you as well. It's hugely important that you've got a sounding board."

Encouraging the group to bounce ideas off each other and to network among themselves over the coming months, she added: "It's a learning curve and an environment we hope will be safe and nurturing for you to develop and expand your knowledge, your confidence and your own self-belief in the leadership you are currently doing."

"Beyond 20X20" is subsidised through Sport Ireland's Dormant Accounts. The last Female Leadership Programme was delivered by Donegal Sports Partnership in 2020.