17-year-old Alex Parke was diagnosed with a form of cancer last week and is in hospital, meaning he can't attend the Donegal International Rally 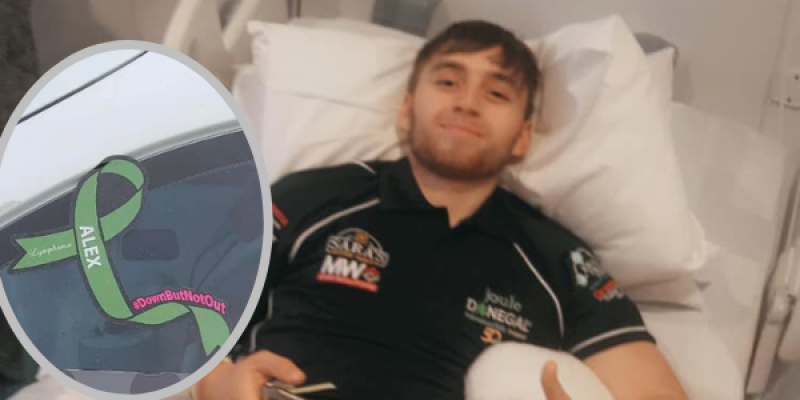 Alex Parke is in hospital and (inset) stickers on a competing car in support of the Convoy teenager.

A social media campaign has been launched to make sure that a Convoy teenager can feel the excitement of the Donegal International Rally from his hospital bed.

Last Friday, 17-year-old Alex Parke learned that he had non Hodgkin’s lymphoma, a form of cancer.

Now, a Facebook page - Let’s Bring The Rally To Alex - has been set up and rally enthusiasts have been asked to submit videos and images of the stages and other events, like King of the Cone, associated with rally weekend.

Live blog: Follow the action from the Donegal International Rally

Initially, it was thought that Alex was suffering with ingrown acne, but a spot on his back began to swell and show signs of bruising.

On June 1, an abscess was removed and further tests were carried out.

Last Sunday, Alex was taken to hospital in Galway and is currently in Dublin undergoing further tests,

“He will require a lot of chemo and a lot of help to get through it,” Lynn said,

“We are hoping to find out what form of it that it is to see what treatment he needs. We’re hoping that he can start treatment in Galway and finish it in Letterkenny.”

Alex’s spirits have been lifted with the volume of postings to keep him up to the pace with all the action in Donegal.

Lynn said: “He has been fantastic. It’s amazing how strong he is.”