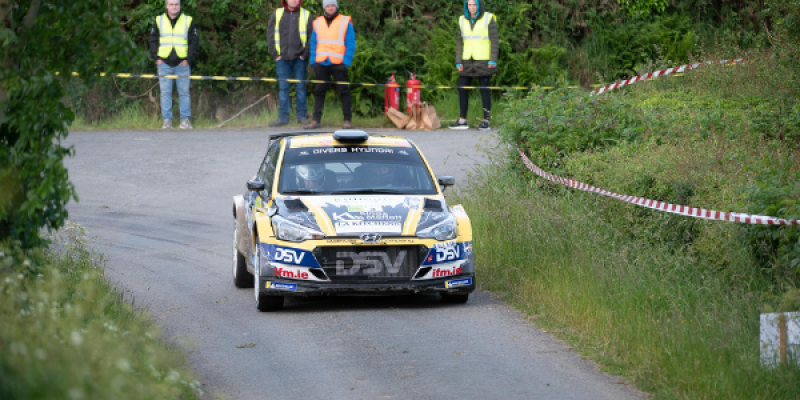 Josh Moffett might have a slender lead heading into the last three stages of the Donegal International Rally - but he’s not getting ahead of himself.

The Monaghan man has gained the lead spot after high drama on the opening loop.

Moffett has just one second to spare on Alastair Fisher ahead of runs over Gartan, High Glen and Atlantic Drive.

“It’ll be a tough last three stages, but we’ll just do all we can,” Moffett said

Breaking: Matt Edwards OUT of Donegal Rally as drama continues

The British Rally champion exited on SS17, Atlantic Drive, but there is now just one second between Josh Moffett and Alastair Fisher

“It’s been a great weekend so far and we’re really enjoying the race. I’d be over the moon to do it.

“It would be unbelievable to win Donegal, especially when you look at the competition that has been here and where we were for the first few stages.

“We can’t count those cards yet; there are three long, tough stages.”

Now, Josh could follow in his footsteps. The Irish Tarmac Championship lead, he has a huge afternoon ahead of him.

Moffett said: “This is a long three days and a tough three days.

“Our race was with Alastair and I was just concentrating on that for Championship points. It’s still Alastair, but it’s for the win now as well.”