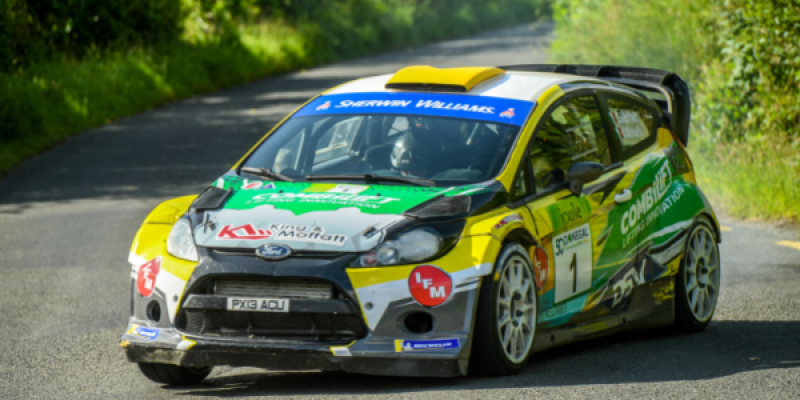 Moffett gained the initiative after leaders Callum Devine and Matt Edwards crashed out in the early stages on Sunday.

Devine, the overnight leader who set the pace right from the get-go on Saturday, crashed into a chicane bale on the Gartan stage.

That put Edwards out in front, but the Welshman, the reigning British Rally champion, careered off on Atlantic Drive.

Breaking: Matt Edwards OUT of Donegal Rally as drama continues

The British Rally champion exited on SS17, Atlantic Drive, but there is now just one second between Josh Moffett and Alastair Fisher

As a result of Edwards’ accident, the stage was cancelled. Edwards and his co-driver David Moynihan were uninjured.

The drama wasn’t done there.

At service following the opening loop on Sunday, Moffett had just one second to spare on Alastair Fisher.

The margin briefly went out to 3.8 seconds over Gartan, but a puncture on High Glen saw Fisher lose time and he ended up in fifth position.

Moffett went to Atlantic Drive with a firm command and there were emotional scenes just outside Downings when the Hyunda i20 R5 carrying the winning crew, Moffett and his navigator, Andy Hayes, came into view.

It’s a remarkable eight wins from eight for Moffett in the 2022 Irish Tarmac Championship.

Donegal man Kevin Gallagher was the leading modified competitor. The Rathmullan man, navigated by Derek Heena, won by just over a minute from James Stafford with their Darrian T90 GTRs leading the way in class 14.

Declan Gallagher was he third modified finisher and Mark Alcorn - who posted some blistering times, particularly on Gartan - was fifth modified and 14th overall.