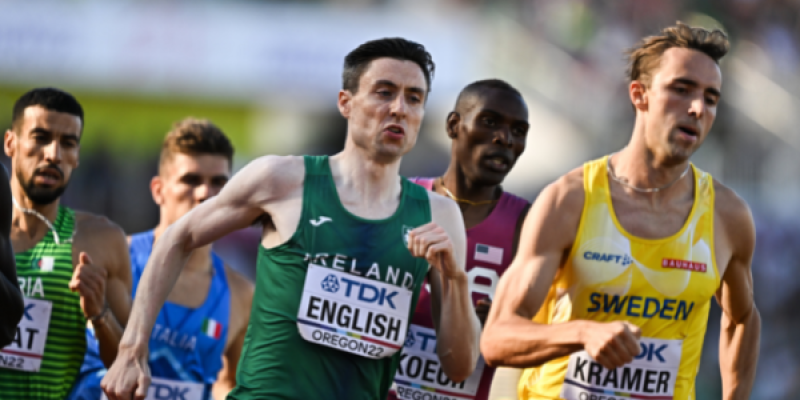 Mark English on his way to qualifying for the 800m semi-finals at the World Athletics Championships. Photo: Sportsfile

Mark English was just outside his Irish record as the Finn Valley AC man booked a spot in the semi-finals of the World Athletics Championships.

The 29-year-old’s time is the fastest ever 800m by an Irishman in a Championship race and it is his own second fastest of all time.

Out of lane seven, English qualified automatically after US athlete Jonah Koech was disqualified for 'jostling/obstructing'.

The top three from each heat qualified for the semi-finals along with the next six fastest athletes. Even before Koech's DQ, English was safely through after a competitive heat that was won by Marco Arop from Canada.

In 32 degree heat, English clocked a season’s best time, beating the 1:46.02 he set when competing in the VI Memorial José Antonio Cansino event earlier this summer.

English’s curve was promising as he headed for the Hayward Field in Eugene, Oregon having won an eighth Irish senior outdoor 800m along the way.